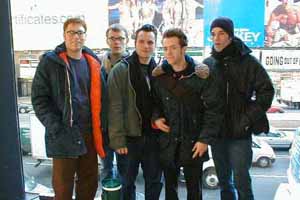 EMO: What is it? G. Rolter answers the age old question, kinda.

EMO: What is it? G. Rolter answers the age old question, kinda.

The Get Up Kids get EMOtional.

It’s 11:26 PM on a Saturday night and I have just been asked to write a one page article on "emo". How emo. Wait, what the fuck is "emo"? The answer will vary depending on who you ask. You’re asking me and so, here goes…

The term "emo" stems from "emotional hardcore" but over the years, the latter half of the term has been left by the wayside. What has now been adopted by mall-punkers with a "soft side", started out as a sincere punk rock spin-off. Bands like Fugazi and Rites of Spring were able to gel the crunchy chord progressions and loud drums of punk rock with genuine, emotional lyrics about heartbreak and relationships without being called pussies. And thus, "emo" was born. "Emo" had a good run through the early-to-mid nineties; bands like Sunny Day Real Estate and The Promise Ring kept the tradition alive. There was something about the music that kids could relate to. Kids who felt isolated and alienated, the kids who kept diaries and liked to cry, the kids who never got picked in gym class because they were too skinny. And, it took a band that was actually comprised of kids like that to change the face of "emo" for years to come. That band was Weezer. Though, the peppy, power-pop they play(ed) was very different in sound than that of the aforementioned bands, Weezer was quickly lumped into the very vague "emo" genre. Lead by King Geek, Rivers Cuomo, Weezer released two very strong albums, earning them the coveted title of "emo gods". It wasn’t until the late nineties that "emo" began the down-hill-snowball-effect that kept rolling into the new millennium.

After Weezer hit the scene, "emo" and "geek rock" become intertwined, despite their conflicting sounds. However, "emo" had no idea what it was in store for. These days, it has become very, very easy to categorize and stereotype "emo" acts, as they have established an aesthetic standard for themselves; tight, thrift store t-shirts, faded jeans, jet black hair, etc. It seems to me, that any band that fits this aesthetic is "emo", but what about the music? Does anybody even care anymore? Is it right for Boxcar Racer and Bright Eyes to be lumped into the same category? I will now attempt to further illustrate this point: take for example, Dashboard Confessional and Taking Back Sunday. Both these bands are considered to be "emo" by modern standards, but why? Do they sound alike? Absolutely not. But, do they dress alike? Yes. What used to be a sincere art-form is now a trendy fashion statement. What the fuck is going on here? These days, everything seems to be "emo". From the most commercial shopping center to MTV… "emo" is fucking everywhere! It’s literally embarrassing to use the term to describe something in total seriousness as it has been bashed, beaten and totally thrown out of context over the years. It has even become a big joke among the musical elite and indie snobs.

It’s now 12:00 AM. I am in a light fit of rage and a cold sweat has broken on my brow. I am basking in the glow of an SNL re-run and still wondering… what the fuck is "emo"?!