The album is monolithically beautiful, sad and savage. And this review will probably be in Private Eye in a couple of weeks. 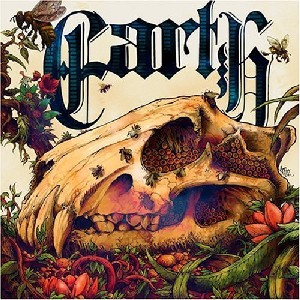 Earth – The Bees Made Honey in The Lion’s Skull

The satirical magazine Private Eye has a section called Pseuds Corner featuring selections of impenetrable and over-intellectual musings. When writing a review of Earth (whose newest release contains song titles such as Miami Morning Coming Down II (Shine) and Engine Of Ruin) there is a always a risk that a writer may end up with the ignoble delight of gracing its pages.  I suppose I’ll just have to take the risk.

If some future Ingmar Bergman were to take the Albert Camus novel L’Etranger and transport the setting from Algeria to the Badlands of America, then this would probably be the soundtrack.  Whilst Dylan Carlson says that with this release he was trying to make “a kind of gospel record” to this reviewer’s ears it sounds more like a musical expression of existentialist absurdism.

The album title (taken from the story of Sampson and Delilah, but a far cry from Tom Jones) makes reference to something sweet coming from darkness. This doesn’t seem much in evidence on the opening track Omens and Portents I: The Driver, which is suitably ominously portentous and suggests a kind of slow apocalypse happening in the Mojave Desert. However there are moments of light to contrast with the darkness. The piano part on Miami Morning for example lends the opening of that track a warmth and delicacy not often associated with Drone. There could even be said to be moments of loveliness.

The album is monolithically beautiful, sad and savage. And this review will probably be in Private Eye in a couple of weeks.