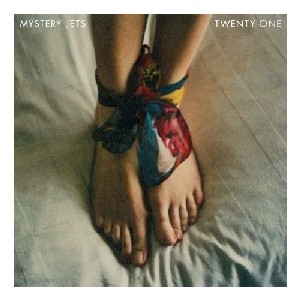 Sadly there aren’t too many records that sound like Aztec Camera being made these days, either. Yet Two Doors Down sounds like the love-child of Martin Fry and Roddy Frame.

Mystery Jets could have been destined for the ‘Where are they now?’ files. Fellow alumni of the Eel Pie island scene that emerged a couple of years back seem to have disappeared in the general post-Libertines malaise. However they look to have prevented a slide into obscurity with an album of bright and breezy pop gems. The album is heralded by a siren and the album opener Hideaway seems to suggest an album replete with bombast. Tracks such as the hook laden MJ would seem to bear this out. Much of the record, though, is of a more subtle and gentle hue. Flakes makes much of Blaine Harrison’s earnest voice and dreamy musicianship. The album is sustained by a winning pop sensibility.

It seems that every indie band of recent vintage has been mining the seam of 1980s music so vigorously that there is surely nothing left. The Mystery Jets, though, have found a few nuggets missed by others. Surprisingly, given Brandon Flowers predilection for shiny suits, The Killers have yet to make anything that could seriously be mistaken for ABC. Sadly there aren’t too many records that sound like Aztec Camera being made these days, either. Yet Two Doors Down sounds like the love-child of Martin Fry and Roddy Frame (indeed b-sides for the single includes a cover Aztec Camera’s biggest hit Somewhere In My Heart). There is a joyousness to the song that even lets you ignore the somewhat naff sax solo at the end.

Single Young Love astutely features the vocal talents of folkie lovely Laura Marling, adding a layer of beauty to this sly tale of a one-night stand. There are places where the astuteness and surety of their touch deserts them. Hand Me Down fails to connect and Umbrellahead, although lovely, feels somewhat out of place, a little ramshackle amongst the glistening pop sheen that surrounds it.

If they do appear in an article entitled ‘where are they now?’, then it’ll probably note that they seem to be doing alright for themselves.