Given a choice between Rydell’s near-whispered croon and the gauche loudness of, say, The F**tellis and it is Sweden’s answer to Mark Linkous who will inevitably win the day. 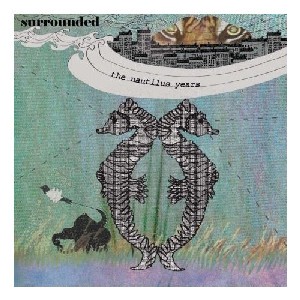 There are, for those who have not the whit or imagination to do it themselves, sites on the internet that offer band name generators which take random words and throw them together. It would appear that Surrounded have used a similar program for some of the song titles on The Nautilus Years. Titles like Paper Tangerine Crush and Human Pelagic sound like they were pulled from a hat. The lyrics are similarly incomprehensible. What are more easily discerned are their musical influences. This album would fit perfectly into the cannon of Mercury Rev, Sparklehorse or The Flaming Lips. It shares not only the same hushed vocals akin to a Wayne Coyne or a Mark Linkous; not just a similar adeptness with orchestral strings; and not only a use of surrealist lyrics; but also that same sense of wide-eyed wonder that permeates those bands’ records.

What can be discovered from the lyrics are those big themes of hope and despair. This can be seen in the contrast between such lyrics as ‘A rainbow found your eyes’ and ‘Did I stand a chance/ in strangling cannons/ to become what I’ve lived.’ On the whole it seems to be despair that wins out, at least lyrically. Musically, as with their dream-pop forbears, hope shines through.

The album shares much of what is good about the acts I’ve already mentioned, but also the deficiencies. Most particularly Mårten Rydell’s barely-there vocals sometimes get in the way of the grandeur of the music. Not only does it make the lyrics difficult to make out, but can themselves distract from the music, especially with the lusher arrangements. Furthermore the album has a tendency to blend together making it prone to the criticism that it doesn’t really go anywhere.

There is however a stately beauty to the album and an understated charm that contrasts sharply with much of the current crop of indie tosspots. Given a choice between Rydell’s near-whispered croon and the gauche loudness of, say, The F**tellis and it is Sweden’s answer to Mark Linkous who will inevitably win the day.