superbly crafted, exquisitely performed, but to be honest it’s not my cup of tea 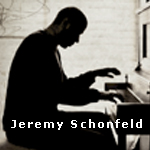 Quick warning. There’s nothing on the front cover to suggest what’s in store for you here. There we have a picture of a guy – who we can suppose is a certain Mr Jeremy Schonfeld as that’s the name that’s written underneath him – sitting playing piano. There are some fancy designer squiggles bordering the page and a scrawled title, 37 Notebooks.

Looking at that, you’d probably think you were in for some earnest, piano-led songs in the vein of, well, every other singer-songwriter looking for a break but you’d be wrong. Turn to the back cover and you may get a hint.

Now, what we have here is a pile of notebooks – or at least a picture of them – and some fancy designer person has layered the song titles over the spines of said notebooks. A nice, if straightforward, idea but that’s not what I brought you back here for. Take a closer look at the spines of those notebooks. First we get the track number then, before we get to the song title, there’s another little piece of information. They’re not so much author’s signatures, but rather the cast of this album and cast is the right word because essentially what we have here is the soundtrack to an Off-Broadway musical.

Well, not really, as I don’t think this is actually the soundtrack to anything, but it seems Mr Schonfeld has been working in the theater for a while and boy does it show.  He’s gathered together a bunch of theater musicians and vocal talents and made an album with them but there’s something very different to the way people write music for theatre to the way people write music for mainstream consumption, unless of course you’re Billy Joel or Elton John. Hey, I tell you this, if Randy Newman ever pops his clogs, then Disney could do worse than look up this fella as I’m sure he’s got a couple of animation soundtracks hidden up his sleeves somewhere.

What we’ve got here sounds like the type of thing Tim Rice, Alan Menken or Sir Andrew Lloyd Gollum Webber would like to put on the stage or screen. This is so Broadway it even has sections where, to emphasize the emotion, the singer starts to shout, reaching for the back row, the piano gets bashed a bit harder, the music swells and then, when it all wants to collapse, in comes a cheesy guitar solo right out of an 80’s movie.

It’s superbly crafted, exquisitely performed, but to be honest it’s not my cup of tea. My girlfriend, on the other hand, will absolutely love this so I don’t think this will be gathering dust any time soon either. I will give bonus points for the song titled Rock And Roll Fag, which is rather amusing and I can not fault the way this has been put together, but I’m not the biggest musical lover and so this is therefore a bit lost on me.

It’s a damn sight better than Savatage’s Streets: A Rock Opera though, I can tell you that.