so old fashioned it should play at 78rpm 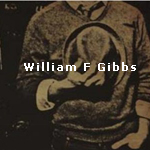 “The old ones are always the best.” That’s a phrase my mother has said to me on a  number of occasions – usually when I mention I’ve been to see a band and it’s somebody she’s actually heard of – and it’s a phrase that I think Mr Gibbs would probably agree with me on. This album sounds so old fashioned it should play at 78rpm. You should also look at it through sepia tinted glasses too because My Fellow Sophisticates oozes old fashioned, deep Southern charm and you should dress in smart attire out of respect before you handle it.

William F. Gibbs hails from Alabama and, like Belfast’s Duke Special, is obviously MADLY in love with old fashioned noise. My Fellow Sophisticates bristles with cracks, crackles, scratches and even the occasional hiss. Not only that, but it contains some of the happiest, most uplifting music I’ve heard anywhere this year – you really don’t need to turn up the BPM to have a good time.