He’s interviewed a lot of people. Some of them were hard to track down. But, well, that’s what writing a book involves and we don’t really need to keep hearing about it. 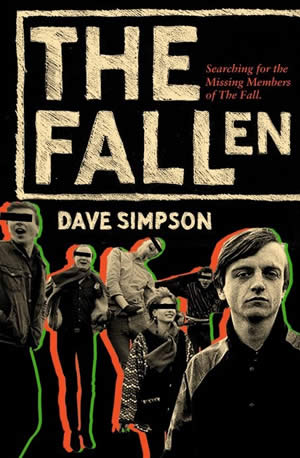 The steady turnover of musicians in The Fall means that Dave Simpson’s quest to track down every ex-member of the band is bound from page 1 to end in defeat – while you are reading this, let alone while Simpson was writing the book, Mark E Smith has probably dispensed with another unsuspecting bass player or consigned another drummer to a level of obscurity marginally greater than that which they enjoyed while actually in the group. The forty-odd men and women that Simpson contacts in The Fallen give a pretty consistent account of why this revolving door policy has become one of The Fall’s most familiar characteristics. Smith emerges, not unpredictably, as a band leader with whom it’s virtually impossible to sustain a long-term working relationship. This is not only how he likes it, but seems essential to his own longevity as a relevant and productive artist.

Nevertheless, Smith inspires loyalty and affection from virtually everyone he’s seen off in the group. His recruitment policy – plundering local pubs, go-nowhere support bands and studio or road crew – is reflected in the circumstances in which Simpson finds many of his subjects. In ordinary jobs, maybe on the fringes of the music business, but certainly not propelled into a successful showbusiness career on the back of a stint in The Fall.

DJ Mark Riley and fashionista Brix Start-Smith are probably the only former members who might be publically known for anything not acheived under Smith’s aegis, but given the group’s sheer turnover, a couple of independently successful ex-associates is perhaps a statistical likelihood.Smith himself is interviewed, though slightly perversely this conversation comes at the beginning of the book, rather than the end, as if to suggest he is not real subject of The Fallen. And perhaps Simpson wants to avoid drawing focus from his McGuffin – the search for apparently unhinged ex-drummer Karl Burns. But whatever its title, this is not a book about the former members of The Fall, but inevitably a book about Mark E Smith through the filter of those ex-members.Simpson’s dedication and enthusiasm is beyond question, but his decision to place himself at the centre of the book is its major weakness. We’re furnished with continual references to phone messages left, emails sent, the obsessive and seemingly endless nature of his quest and the toll it takes on his personal life.

In doing this, the implication seems to be that this is some kind of Dave Gorman-esque folly, but such a folly needs stricter if more arbitrary and gimmicky parameters to carry the reader along. Simpson doesn’t resolve to meet each member in person, to have his photo taken with them or assemble them all in one room at the same time.

Would that kind of thing make The Fallen a better book? Almost certainly not, but without some kind of additional conceit, all the author is resolving to do is contact, in some shape or form, as many of a group of forty-odd people as possible. And ultimately all that constitutes is research.

It’s almost as if Simpson thinks other biographies write themselves. Simpson’s inclusion as a likeable character in his own work gives him a kind of everyfan status to which the target reader can certainly relate, but he hasn’t really earned the right to show his working out in this way. He’s interviewed a lot of people. Some of them were hard to track down. But, well, that’s what writing a book involves and we don’t really need to keep hearing about it.There are other problems, notably poorly reproduced photographs at the head of each chapter – surely the book demands ‘then and now’ pictures of as many participants as possible? – and a writing style that sometimes calls for a dollop of polish, but ultimately Simpson has struck on an idea which having been realised seems not just a useful but an obvious and essential part of the expanding canon of Fall-related literature. And there are a few revelatory moments here – drummer Dave Milner’s sketch of Smith’s vulnerability lingers as long after reading as any of the manifold descriptions of the singer as contrary malcontent.Words: Daniel Maier