As usual singer John threw himself into the spirit of the night, bouncing around like some demented Gulag inmate out on day-release. Oh the fun you can have if you really try.

Ah Calvin Party, what fun there is watching this lot of Mancunian degenerates and Bohos. Quite simply they are one of the most enjoyable live bands I’ve witnessed, as much for what they have to fight against, as for the colour and heartfelt fun they produce on stage. Tonight’s performance was the cementing of a friendship they’d formed with Dutch post-punkers Cradle saw them playing the Taverna in Nieuwenkerk, a town which is a bit like a posh–ish housing estate.

The Taverna is a great little venue; friendly staff & locals, cheap ale and good sound all help. As does the fact that this youth club is seen as an asset by the locals, as well as a meeting point for all ages (there were a lot of older rockers leavening out the skinny jean pups in the audience)

Onto the gig proper. First up was TamsinA, singer in Calvin Party, but showing off her solo stuff as a musical aperitif to the main course. It was one arty girl and a guitar, which usually means quiet, winsome wailing but bloody hell – this was nothing of the sort. She can’t half sing. And she has a nice line in acerbic power pop. It helps that her songs are slightly groovy rambles (with lots of stop-offs for the odd whispered reflection), as this allows her to create musical landscapes of considerable power. At times it got into Renate Knaup territory (highest praise from this old get). If I were you I’d go and check her out.

Cradle are on next, powering into a set of bleak landscapes inspired by the usual suspects. Not actually that they’re that derivative, despite the seeming devotion to The Colin Newman Lyric Manual. There’s an internal battle between wanting to be a successful pop band and wanting to play difficult music that is very appealing. And the young lass on lead guitar is brilliant, at times sounding like John bloody McGeough. Now and again the long drawn-out industrial work–outs kick up a level and enter Suicide or Magazine territory. They’ve certainly got something.

After this we have Calvin Party, who are in a good mood and smash through a high-octane set, stuff like 8 Days and History Girl sounding particularly powerful. Lies Lies and Government gets most of the revellers dancing; even your trusted correspondent cut some rug to that one. There’s a dirty DIY groove to their music that’s really apparent when seeing them in a live setting. As usual singer John threw himself into the spirit of the night, bouncing around like some demented Gulag inmate out on day-release. Oh the fun you can have if you really try. 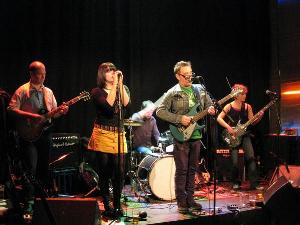 A splendid time had by all.

Pics: Courtesy of the bands