Imagine Guided by Voices and Ergo Phizzmizz hanging out for a pint of mild and you’re not far off. 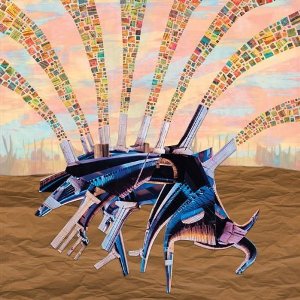 Golly mick, I haven’t heard power pop like this since Bob Mould broke Sugar up. Parts and Labor Receivers have created an LP that simply thrives on power chords and major key-changes surges. The bits in Satellites and Nowheres Nigh where the whole thing goes up an octave or two are so basic that you have to laugh out loud. It’s so in your face it’s untrue.

As I mentioned, Sugar was the first thing that popped into my mind when I heard this. However this isn’t a guitar album per se. There’s plenty of experimenting going on too, especially with the strange otherworldly spazzcore-style wibbles and blurps that creep out from behind the wall of guitar sound. Imagine Guided by Voices and Ergo Phizzmizz hanging out for a pint of mild and you’re not far off.

There are quiet bits; Mount Misery builds on a gentle riff to creative something pretty elegiac and Wedding in a Wasteland is a weirdly appealing MOR reflection on top of some pleasing sleazy keyboards and some (yes) Van Halen trappings.