The whole point of Sonic Cathedral is that although it comes from a shoegaze background it does try to cultivate an open music policy; you don’t just hear shoegaze, you hear its inspirations and the things it turned into.

IN: So you’re based here in Manchester, even though most of you aren’t from here originally, and yet you’re playing a style of music which is totally different to pretty much anything that’s going on here… it’s almost wilfully perverse, isn’t it? What brought you here?

OS: We’ve been doing this for about five years now, and I think if we’d started with a full band five years ago none of this would have happened, like you said shoegaze was off the radar totally.

DL: Manchester’s an accidental forum for us really in that none of us are from here, we came here for university most of us; Graeme (Meikle, more guitars) is from Edinburgh, Oisín’s from Dublin, I’m from Devon, but in a wider sense what drew us all to Manchester in our own ways was a perceived openness about the music scene that you wouldn’t find so much elsewhere, apart from London but things are probably spread out a bit too much there.

Manchester had good universities, a good music scene, but it was also small enough for people like us who apart from Oisín are all from the sticks. And I think we all like The Stone Roses, Primal Scream whom I know aren’t really from Manchester but there’s a big Manchester thing there…

OS: The musical heritage was a big draw for me, I remember leaving home and someone said – tongue in cheek – “oh, you’re going off to Manchester to live the indie dream” and it’s happening right now which is bizarre… yeah, I remember the very first time I was in Manchester on the way to an open day at Salford uni, going past the Hacienda and seeing it had closed, cos I never realised, I was devastated, you know? Manchester when you’re not from here has that kind of mythical indie music status.

DL: Punk was effectively born in the UK here, Factory Records was here, all these things have a DIY ethic, about putting things out yourself and making things work with tiny tiny budgets, and in spite of all the attention we’re getting that is the way we do things and how we want to do things forever. So even though we don’t really fit in with the Oasis crowd, in a spiritual way it’s a very good fit. 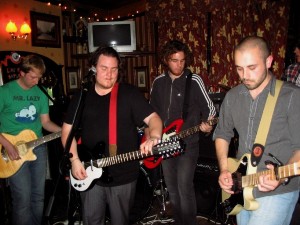 IN: You do your recording basically in your house, is that a nice way of working?

DL: I think we prize above everything else being able to record when we’re in the mood, that’s something that doesn’t happen when you’re spending £400 a day in a studio.

OS: I don’t know what we’d do if we went to a studio and were told “you’ve got one week to make this record”, though I’m sure we’ll do it at some point just to experience it.

DL: It’s a nice setting, we’ve got a nice house, some reasonable equipment, and it does mean that the spirit of the thing is intact because we get to do things when we’re really inspired. Sometimes we’ll make a whole song in a day; sometimes a song won’t be finished for the best part of nine months.

IN: And the neighbours are all right about it too, clearly, as you chose to launch your last EP in your local pub…

DL: There are big thick old cottage walls, and the other side of that house there’s a pub with the biggest crowd of wreckheads you could imagine! 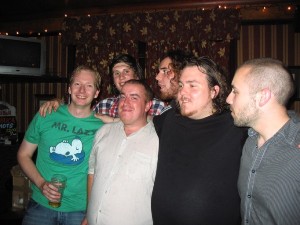 OS: I do think it’s bizarre sometimes there are people over at the graveyard over the road visiting their relatives and they’ll hear this ethereal music… a cathedral of noise…

IN: Which brings us back to Sonic Cathedral, which was after all named after the sort of flowery words people tend to use writing about this kind of music… what’s the most bizarre description you’ve read about yourselves?

DL: The first review we had was some guy who’d randomly picked up on our Myspace and left a message on a shoegaze forum that said “they sound like Resplandor trying to sound like Mallory” – neither of which we’d ever heard of, and now I have heard them I can’t really see it at all.

OS: It was just really surreal, you know, two bands we’ve never heard of… may as well have been “it’s like Fartathon trying to do a cover of a… Green Injection number” (laughs)

IN: So you’re out on the Sonic Cathedral tour with Neil Halstead, someone who came from a shoegaze background but has moved quite a long way from there, how do you feel about going on playing shoegaze music to his modern day crowd?

DL: I think the fans will be open minded, old fans that have followed Neil aren’t going to throw away all their Slowdive albums just because he’s making folk music now – if it had been any other promoter I don’t think we would have done it.

The whole point of Sonic Cathedral is that although it comes from a shoegaze background it does try to cultivate an open music policy; you don’t just hear shoegaze, you hear its inspirations and the things it turned into – you look at some of the records that have come out on the label, things like Miranda Lee Richards, you couldn’t call that shoegaze at all. But one of the reasons we’re looking forward to this tour is it’s give us an excuse to start playing some of the other songs from our catalogue that aren’t really shoegazey at all.

OS: Some bands are rock or indie and will throw in a kind of ambient, shoegaze number; we’re the opposite, we’ll throw in something a bit more standard.

DL: And if anything it’ll take some of the heat off Neil, he won’t have to ignore quite so many requests to play “Dagger” or “Catch the Breeze” – we’ll keep the shoegaze people happy and then he can play his set in peace.

IN: So no temptation to get him very, very drunk and try and coax one last Catch The Breeze out of him then?

DL: I heard he sold all his pedals, so if the pedals are there who’s to say?

In the end, of course, it doesn’t happen. It doesn’t need to. Daniel Land And The Modern Painters go down a storm with Neil Halstead’s crowd and vice versa, everyone gets quite drunk and goes home smiling. The band’s Sonic Cathedral single Within The Boundaries / Benjamin’s Room (mixed by Ulrich Schnuass and Mark Peters) is available from Monday 27th October from good indie shops in the UK and by mail order at

Pasrt one one this interview can be found here.