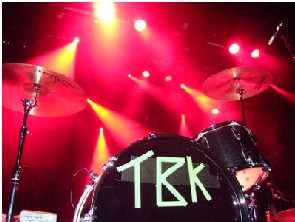 Two pretty geeky looking guys took to the stage, one a gangly NHS glasses-wearing drummer and the other who – compared to his band’s album cover – looked pretty much like he had been to the barbers this very day.

On a cold, dark night in Utrecht, there was some magic and some mediocrity ringing out from the Tivoli theatre. It seems that headliners The Black Keys have become the two-piece of choice amongst some of the legends of rock music. Just one reason why we headed down to see what Robert Plant had been banging on about.

The Keys had brought Liam Finn along with them on their tour as the support act and as I must admit to being a big fan of his ol’ man’s work and with such a musical family surrounding him, I had high hopes for Liam. He had a percussionist for support, who looked rather meek and nervous beside him.

It all started with a slightly ethereal sound backed by a simple vocal guitar harmony. However Liam soon began to flick pedal after pedal to build up an intelligent, layered musical approach to his compositions, which was quite ok for the first couple of numbers. Still, I kept thinking to myself, is this it? Is it the disappointment of casting away the Finn legacy and heading in a new direction that was throwing me? No, it just didn’t reach anywhere. Then Liam threw himself at the drums and began to thump out an exuberant beat over the layers of looped guitar. He had it all working with precision and with obvious talent. Yet again, I kept thinking to myself “and?”… There was definitely something missing. I think a few more members in his musical entourage may have helped greatly.  I can see promise and I must go and listen to his album to see if there is more, though maybe I am setting myself up for more disappointment, let’s hope not.

Then, thankfully, the main event. Two pretty geeky looking guys took to the stage, one a gangly NHS glasses-wearing drummer and the other who – compared to his band’s album cover – looked pretty much like he had been to the barbers this very day. Then the noise began. A hard and heavy overdriven guitar stapled in front of a galloping beat set the room on fire. I had to move back from the stage for two simple reasons; I was quickly becoming deaf and the power of the rhythms was overwhelming. After finding my spot I was enthralled and captivated by the way these two unassuming men cast out deep 70’s-type riffs while pummelling my mind with the effortless rhythm.

I have always thought two-piece bands require something more to complete their sound, and usually in the studio they do.  All added by the faceless musicians who aid them, but on this night in Utrecht I couldn’t help but think that this sound, this complete sound required nothing more.  I was taken in, whirled around the inside of a Marshall amp with the overdrive on full and spat out again a much happier person.

The Tivoli has always given me a strange feeling; it is like something macabre had happened there a long time ago. This emotion is counterbalanced by the almost amorous friendliness of the people who frequent the venue. This paradox was increased tenfold by the Keys as they wooed an already smitten audience with the darkness of their songs and the sweetness of their melodies hidden behind the powered driven riffs. If you were hoping to listen to some banter from the guys, well; you could tell from their demeanour that this was all going to be about the music, and it was…