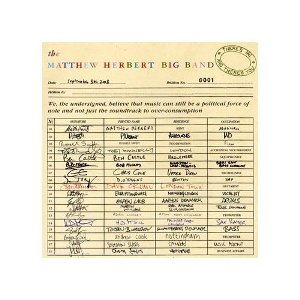 Also, it is on this track that Mtungwazi gives it the full Shirley Bassey and it seems somehow inappropriate given that is based around the life of Guantanemo Bay inmate Bisher Al-Rawi.

The trouble with Matthew Herbert records is that one know too much about how they are made – songs made from the sound of battery farms, tracks formed from munching apples and so on. This album, for instance, features a baby alarm from a neonatal special care unit, each beep representing 100 people killed in the Iraq War. Does it actually add anything to the song? For what it’s worth I think that Herbert’s process of song making is valid if he starts off with the ideas so that the sampling process controls the direction that the final track takes. If the song exists and then the samples are added then they do work only as gimmicks.

Anyway. What about the music? Whilst There’s Me and There’s You is clearly a deeply political album it is possible to listen to it as a pretty straightforward jazz album. The difference on this, the second of Herbert’s big band albums, is that he’s employed a single singer rather than relying on a mix of vocalists. I can’t help but think that this is a mistake. I enjoyed the mix on the last album of the big band, the lap-top manipulation and non ‘jazz’ singers. On this album we just have Eska Mtungwazi, a good singer but not one who can add personality to the songs. She’s too slick and her performances too shallow. This is a shame because there are some good songs on the album, and the contributions of someone like Robert Wyatt for instance would have been great (not least because his and Herbert’s political views would match very nicely).

What I suppose I’m saying is that in having Mtungwazi as vocalist, the album is a little ‘too straight’ for my tastes. Album opener The Story is a strong track, opening with electronic chatter and a military beat. Thumb clicks and horns join in and a gently swinging track emerges, with soulful backing singers. It comes as a bit of a shock to hear that the lyrics are about martial law and the suspension of habeas corpus. Pontificate starts off with cut up voices and more electronic squiggles. The track comes across in its early stages as though the band has a stutter. Waiting is a more straightforward track, whilst The Yesness swaggers joyously into show-tune territory. Battery is more avant-garde although, and this is a weakness, Herbert tends to chuck all the sonic weirdness into the opening of the songs so that they all end up becoming much more mainstream as they progress. Also, it is on this track that Mtungwazi gives it the full Shirley Bassey and it seems somehow inappropriate given that is based around the life of Guantanemo Bay inmate Bisher Al-Rawi.

And so the album continues, 90% big band and 10% laptopery. Knowing and Nonsound switch the percentages around before Just Swing rounds things off with a suitably swinging outro. All in all, it’s a decent album let down by the rather galumphing vocals of Eska Mtungwazi.