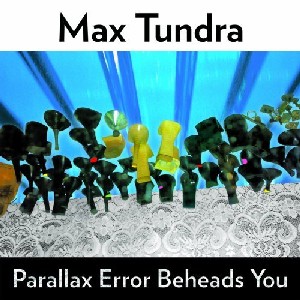 It seems that both artist and label fear the ‘obvious’ comparisons with Tundra and Scritti Politti’s Green Gartside.

Well, what to make of this? A case of the proverbial curate’s egg? I’d say so. Equally irritating and inspiring, this record tries damned hard to attack the listener at all angles, but this approach only serves to show that you need something to The chirpy opener Gum Chimes is bloody enjoyable in the way Robyn Hitchcock’s The Man Who Invented Himself is on Black Snake Diamond Röle is; a track that makes you drop your guard, allowing the artists’ to assert itself. Problem is that you wait a fair number of tracks for Mr Tundra to stop cruising around in his own comfort zone and ‘sock it to ya’.

It’s funny reading the (as always with Domino, the unintentionally uber-pseudy) promotional bumpf that accompanies their discs; in this particular case, there’s an attempt to deflect the (supposed) criticism that they expect hacks to dredge up after hearing Parallax Error Beheads You. It seems that both artist and label fear the ‘obvious’ comparisons with Tundra and Scritti Politti’s Green Gartside. Well I like Scritti a hell of a lot; they’re a truly great pop band, so for me the idea that you can fell this record with Gartside comparisons seems to be missing the point.

No, the problem for me is the fact that the ideas aren’t fully digested, and as such, they don’t seem to have enough ‘muscle’ to get the focus to grab you and move you. When it does (and the great tail out on Which Song or the fabulous Orphaned are cases in point), you really see that the lad is a talent. And in fairness, once the whimsical attitude is dropped about half way through, things pick up considerably. Nord Lead Three and the Aztec Camera-tastic The Entertainment are very, very strong tracks indeed.

It’s true that there are more good ideas on this record than you’ll find on most other records out. And I like that a lot. But they need working on; they need to sweat a little to prove themselves. As some old composer said; it’s 1% inspiration, 99% perspiration.