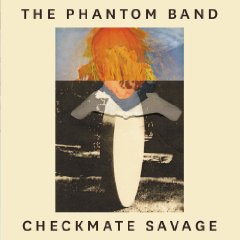 This is a band with an inherent confidence gained from an obviously thorough musical knowledge; they can certainly play around with lots of influences whilst not blatantly ripping them off.

Mighty fine LP this; and one well worth sticking with as a few listens will reveal its understated charm more clearly. Quiet, mid-tempo Kraut/stoner grooves are all very well, but they hardly take you by the hand & lead you to the psychic dance-floor; so, despite the odd nods to Can (especially the breakdown during Burial Sounds, which is ‘hot from’ Tago Mago) & Crocodile’s obvious reworking of Neuschnee & Lila Engel at the same time, I was initially left waiting for something to happen.

Still that’s my problem, not this record’s. This is a band with an inherent confidence gained from an obviously thorough musical knowledge; they can certainly play around with lots of influences whilst not blatantly ripping them off. And they have a canny knack of writing a lazy hillbilly melody along the way; something the Beta Band could do too. These tracks suck you in; once you get used to their space, they let you fill in the blanks, often in quite a surprising manner: Halfhound conjures up mental images of a crazed Calvinist pastor running amok in Greenock…

Every sound is counterbalanced carefully against its partner; the tempo is kept on a leash, allowing the subtle instrumentation to drive things. Check out the vintage synth that dovetails against the pastoral, proto-Skids stomp on Left Hand Wave. Or the combination of a prime-time Velvets strut/slide and the daft barbershop vocals on Throwing Bones. They’re not averse to letting things simmer either; Island, simply by the virtue of its unchangeable nature, slowly builds up into a very effective lament indeed.

Great LP, but give it time.