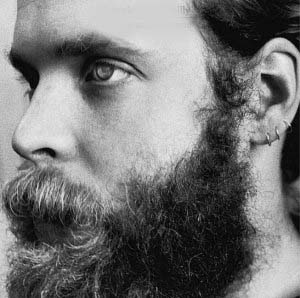 Elsewhere in the aforementioned press release it states that ‘Sometimes all you want to do is fuck’. Well sometimes (like when reading such self-aggrandising bull-shit whilst listening to self-vandalising crapulence) all I want to do is yell ‘fuck off’.

This is not a review of the new Bonnie “Prince” Billy album.

‘You are enjoying a promotional copy of ‘Beware’ by Bonnie “Prince” Billy.’ No, I’m not. I might be enjoying it if you didn’t feel the need to use an ‘audio drop-out’ in an effort to prevent piracy. Obviously us reviewers aren’t to be trusted – give us a chance and we’ll happily rip you off and disseminate your product over the internet. Oh and make a load of pirate copies to flog at car-boot sales while we are at it. Well you can just fuck right off.

Now I respect Mr Oldham, not least for his impressive work ethic. In an age where most artists take so long between albums that any new release is as much a test of whether they are still ‘relevant’ as it is of any musical nous, it is refreshing to have someone so prodigiously prolific. Respect to, should flow to Drag City for releasing the work of bands such as Papa M and Pavement as well as the Boony Prince…

Such respect for that record company is now defunct. The self-vandalism is indicative of the way music is increasingly seen as a product, a commodity to be bought and sold. If you don’t have enough respect for your music to not wreck it by placing distractingly stupid and patronising audio clips so recklessly as to crash the vocal and destroy the flow of the music, then how do you expect any reviewers to take it seriously? Turner didn’t put a watermark in The Fighting Temeraire to prevent knock off prints. Review copies of Great Expectations don’t feature sections cut out to stop someone selling them on.

Yet this album which is, the press release tells us, is a ‘measured exploration of the soul’s frailty and the sorry state of human relationships’ isn’t seen as precious enough for the promo copies to avoid unnecessary audio jiggery-pokery. Have respect for your own produce you fuckers and have respect for those you would like to write nice things about your product. Pissing off reviewers is a curious tactic to pursue when trying to flog records.

Whilst it is understandable that music labels and artists should seek to counter piracy such a tactic is an insult to the intelligence. It is a similarly wrong-headed response that has lead to that modern curse of Digital Rights Management, that oh-so fucking clever tool to prevent people copying downloaded music files. Music companies worry that illegal downloading outstrips legal downloading, but miss the very pertinent point that whilst people can download the stuff for free without having any restrictions on what they do with it afterwards, they are unlikely to pay for downloads with restrictions. The mind-set is the same and it is that mind-set that pisses me off. We (unpaid reviewer or loyal consumer) can’t be trusted not to misuse, abuse or wrongly diffuse their product, commodity or stock.

‘Home Taping is Killing Music’ so the slogan went back when the height of technology was a C90 cassette and a twin tape deck. Except that music didn’t die in the 1980s (despite the worst excesses of Stock, Aitken and Waterman). CD burning and internet piracy hasn’t killed music (or even the music industry) yet and somehow I doubt it will. It may be easier to get music illegally than ever before, but still I sit in a room full of (legally purchased) CDs typing on a computer with hundreds of (legally obtained – either purchased online or ripped from my own, bought CDs) music files. There is a sample on Mogwai Young Team where a young woman states that ‘Music is bigger than words and wider than pictures.’ Pseudy pish, perhaps but certainly a truer statement than the patronising ‘you are enjoying’… schtick that infects the promo version of this album like a cancerous cell. Music should be more than the bottom line and protecting profit.

Elsewhere in the aforementioned press release it states that ‘Sometimes all you want to do is fuck’. Well sometimes (like when reading such self-aggrandising bull-shit whilst listening to self-vandalising crapulence) all I want to do is yell ‘fuck off’. Fuck right off you insufferable cunts.