Dylan, God bless him, has always done things his own way. So much so that you often get the impression that he really couldn’t give a monkeys as to what anybody thinks of him 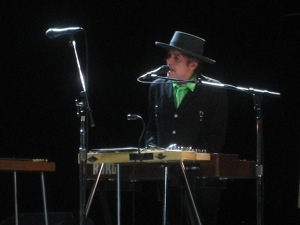 Dylan, God bless him, has always done things his own way. So much so that you often get the impression that he really couldn’t give a monkeys as to what anybody thinks of him – and that includes his paying audience. Tell people you’re going to see Bob Dylan and you get a similar response to the one you get when you tell them you’re going to see Van Morrison, which isn’t a good look. Basically, mention the fact that you’ve spent money on a Dylan ticket and people will look at you as if you’ve just bought a chocolate fire guard. A waste of money, they’ll say. You’ll be disappointed, they’ll say and to be honest, they’re probably right if you’re looking for the kind of singalong, hits laden set that Bruce Springsteen, for example, would play. But remember, this is Dylan and he’s not exactly known for being a crowd pleaser. Tonight’s show was no different.

Here’s the review in a nutshell – I really enjoyed it, but I can see why almost ninety percent of the crowd didn’t and here’s why. Firstly, in typical local fashion the room was about half full by 8:30. The only problem with that was that Dylan had started at 8 o’clock on the dot. Secondly, because his voice is almost completely shot, (his famous whine has turned into a sort of grumbling croak) they kept the levels of the band quite low, which meant that it was possibly the quietest gig ever heard in the HMH, which made the room feel like an empty barn. Thirdly, and this is probably the main reason, the majority of the crowd didn’t have a clue as to what he was singing. Never mind the lyrics or the sound, it was obvious that they simply didn’t know half of the songs.

Like I said at the opening, Dylan does things his own way – as well he should – and although we heard Like a Rolling Stone (which was tremendous), Highway 61 Revisited and Blowing in the Wind (which was a limp closer, to be honest) we got All Along The Watchtower and he couldn’t even be bothered to sing the chorus. This certainly wasn’t an evening for audience participation and it was easy to see why so many of the crowd felt somewhat short changed by the whole event.

But let’s be honest here for a minute, the band were bloody great. As you’d expect for someone of Dylan’s stature, he’s surrounded himself with a group of people that can play really fucking well. The band were incredibly tight and seems as they appear to operate without a set list they had to be on fine form or the whole thing could have fallen apart. On top of that, you could tell that Dylan and the band were having a good time up there. Fair enough, the kind of laid back blues rock Dylan’s peddling nowadays isn’t likely to tip the world on its axis like some of his best work did in the past, but half decent Dylan is still very much worth listening to and two hours of it was more than a satisfying helping. It may not have been to everybody’s taste, but it certainly wasn’t a waste of money.

If you’re one of those that felt short changed tonight, just do your homework in future, that’s all I’ll say. You can always listen to Blonde On Blonde again at home. Dylan, we salute you, you contrary bastard. Thanks for making this a good Friday.