…the grace and lightness of touch shown on tracks like Tiger King, Woman of Aran and The North Sound knock anything the likes of Sigur Ros (and similar atmospheric acts) have done into a cocked hat. 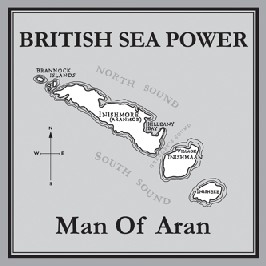 My, are you all in for a treat. 70-odd minutes of expansive, beautiful music from Britain’s greatest out-there band, and a cracking DVD to boot. British Sea Power’s fourth long player, (see it as an LP proper, for what else is it, a tortoise? yoghurt?), is a soundtrack to the 1934 film, Man of Aran. That much is obvious. And all you need to know on the subject right now, because quite frankly, you’ll read more about said film in re-hashed reviews on other sites, and that side of things only interests me slightly to be honest. What really shakes my tree is the sheer scope, intelligence and bravura of the music BSP have offered.

Fittingly, the “in open air, in olden time” theme, (one that we have all come to associate with British Sea Power’s music), is harnessed as a useful ‘meeting point’ between film and band. However, this record is in no way a perfunctory run through of Sea Power’s strengths. Far from it. The band have undoubtedly exploited the exercise of composing a soundtrack to a quasi-nature documentary to the hilt. I’m guessing, but it seems the whole venture has allowed them to do what in some ways they seem most adept at doing; exploring textures, tempo, the spaces between noise and silence, and sound-scapes heard only in waking dreams. The only track with vocals, Come Wander with Me – a beautiful duet between Hamilton & Abi Fry – is a Jeff Alexander composition first aired on the TV series the Twilight Zone. There you go, I’d never heard it before, but it’s a tremendous choice on behalf of the band as it compliments the instrumentals beautifully, and belies some real thought and effort.

BSP’s love of Neu! is evident in the beautiful long tracks The South Sound and Spearing the Sunfish, which bear a marked spiritual resemblance to Rother/Dinger tracks Isi and Negativland respectively. But fear not, there’s no sonic reverence at all. Sea Power are powerful and adept enough to morph the Düsseldorf duo’s template into something fresh, expansive and wholly their own. Oh, and another thing whilst I’m feeling cocky on behalf of the band: the grace and lightness of touch shown on tracks like Tiger King, Woman of Aran and The North Sound knock anything the likes of Sigur Ros (and similar atmospheric acts) have done into a cocked hat.

There are a handful of  old songs beautifully re-worked into this new setting, an even more elegiac version of True Adventures* (if that was possible) is moonlighting under the name of It Comes Back Again, whereas No Man is an Archipeligo is to all intents and purposes Great Skua. Boy Vertiginous, for its part, is a smoother, more relaxed re-working of North Hanging Rock. Do I detect a sonic few loose ends being cleared up?

Maybe the pressure of not having to write a standard album with it’s quota of “radio” tunes has allowed them to be more adventurous than they might otherwise have been. And maybe the mute, gnomic, almost autistic front the band often presents in the media has found its perfect expression. I certainly hope they carry this complex, aggressive, spiky and menacing sound into their future recordings.

A reet top do, lads.

*Or Chicken Pig for the pedants