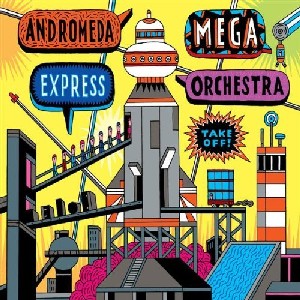 I’m really not sure what the man behind the music, Daniel Glatzel, was looking for when he wrote the score for his very large and ‘eclectically instrumented’ band.

There. Still, over the last week or so I’ve really wanted to write a lot about this LP. It’s doubtless something that will be missed, dismissed, patronised or used as a token of nerdy cool. Whatever. But, as I said, Take Off! is a very strange LP in some ways; it’s obsessive, cool-proof, gauche, and at times plain bloody annoying. And never does it deviate from its chosen musical path.

The opener Gamma Pluto Delta just builds and builds in a hypnotic, Utopian way (I also though of Magma at their most restless whilst listening to this track). There’s enough dissonance and strange musical moments in most tracks that even when they become slightly show-tune (which Asteroids! threatens to do) the strange, Faust Tapes-like cut ups and changes of key and tempo keep things interestingly off-kilter. Other tracks (like Lava Lovers or Scene 3) are more subdued and reliant on a film score tradition that (I suppose) reached its apogee with Hitchcock’s ‘50s classics. At times things get all big band on our asses in a way that wouldn’t shame Duke Ellington or Tommy Dorsey, or the Sound Gallery for that matter… (Milky Way Fables).

I’m really not sure what the man behind the music, Daniel Glatzel, was looking for when he wrote the score for his very large and ‘eclectically instrumented’ band. I certainly don’t think its tribute or nostalgic music per se. Rather, it seems to be a genuine attempt to do something contrary, something different.

This is an intriguing LP and one that merits your attention.