There can be few finer songwriters than Mr. Bill Callahan. It remains a source of constant wonder to me that he is not revered more highly than he is. 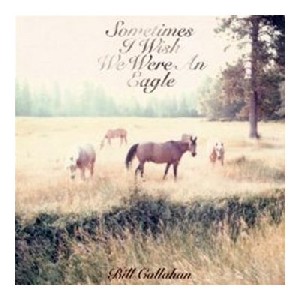 Bill Callahan – Sometimes I Wish We Were an Eagle

There can be few finer songwriters than Mr. Bill Callahan. It remains a source of constant wonder to me that he is not revered more highly than he is. Each year he produces an album of great beauty, wit and emotional depth and each year he is, by and large, ignored. Relatively, that is – the point being that there is no reason why he shouldn’t have a reach far beyond the ‘indie’ community.

Perhaps the problem is that Bill Callahan – the Bill Callahan on the records – is a complex and frequently prickly character. Love songs there may be, but at best they tend to be cryptic and allusive, at their worst they can be plain terrifying. However, when Callahan dropped his Smog moniker and started recording under his own name he seemed to have let a little sunshine into his life. It didn’t last. As opening track Jim Cain has it:

Not that Sometimes I Wish We Were an Eagle is a bleak affair – fleshed out by strings and brass it is his probably his most attractively recorded album to date. But hanging over the album is a man almost broken by loss.

Love is the king of the beasts /

And when it gets hungry it must kill to eat /

Yes, love is the king of the beasts /

A lion walking down city streets.

With its insistent chug and catchy chorus it’s a wonderful song. The Wind and the Dove has a mysterious opening with strains of North Africa. It then delivers a chorus of incredible beauty. Rococo Zephyr continues the run of amazing songs. A lilting opening, with rippling piano and cello stabs, gives way to a simple and affecting song. Really, the first half of this album is stunning.

The second half is pretty hot too. Too Many Birds is more straightforward gentle rock, My Friend heads off into some pretty dark places and All Thoughts Are Prey to Some Beast is, as the title suggests, a little disturbing. The album closes with Faith / Void, a ten minute meditation on God and the need, in Callahan’s eyes, to put him away.

Really, artists such as Callahan are rare. He writes songs that conform to the standard rock template and yet are also uniquely his. His deep voice, careful phrasing and eloquent lyrics set him apart from virtually all of his peers. He really is that good.