Journal for Plague Lovers cannot help but feel like a victory, combining quiet bravery with a surefooted musicianship to fashion a classic yet contemporary sound. 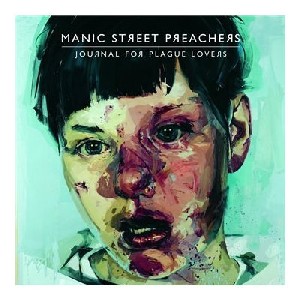 Some 14 years after lyricist and pseudo-guitarist Richey Edwards’ disappearance comes Journal for Plague Lovers, a remarkable record constructed around the final lyrics he left for the remaining Manic Street Preachers.  Thematically this can be seen as a companion piece to 1994s The Holy Bible, a bleak and bloody-minded trail through the dark side of the 20th century. As a band since then preoccupied with escaping their history, this collection serves as a fitting memorial to a lost friend, a stark and focused set delivering more than mere nostalgia.

Recorded in Wales with Steve Albini, apparently the go-to guy for British rock groups requiring a sonic kick up the backside, the record opens with Peeled Apples. Employing bread and butter MSP sloganeering, ‘the Levi jean has always been stronger than the uzi’ harks back to the bad old days of ‘hospital closures kill more than car bombs ever will’.  The difference now is an edgy yet FM-friendly sound which somehow seems as bold as brass under the circumstances.

Jackie Collins Existential Question Time, similarly, has not an inch of fat on it.  A vintage James Dean Bradfield shout ‘n’ solo makes this perhaps the band’s best song in a decade.Hardly a band renowned with playing for laughs, Me and Stephen Hawking sees MSP successfully marry high and low art in a way that Brighton young bloods British Sea Power might appreciate.  News that Martin Noble of that band has remixed the track is unsurprising given that the lyrics feature Herman the Bull and Tracey the Sheep.  It gets better; as ‘100,000 watch Giant Haystacks in a Bombay fight’, Edwards laments missing the sex revolution ‘when we failed the physical’.

The gallows humour buried within these songs might be lost on a listener determined to see Edwards as a one-dimensional misery guts. True, the record’s title track and She Bathed Herself in a Bath of Bleach make for uncomfortable listening under swirling John McGeoch-like guitars, but there is a strange beauty in Edwards’ austerity of mind.  ‘I would prefer no choice,’ Bradfield spits in All is Vanity, ‘one bread, one milk, one food, that’s all’.

The record’s finest moment (notwithstanding the brilliant hidden track Bag Lady) is William’s Last Words, a sombre hymn to tomorrow sung by bass player Nicky Wire.  Never the strongest singer, Wire’s strained vocal adds to the feeling of desperation in the words.  ‘Wish me some luck as you wave goodbye to me, you’re the best friends I ever had’ serves to bring the record to some sort of logical conclusion, as the strings die away.

Journal for Plague Lovers cannot help but feel like a victory, combining quiet bravery with a surefooted musicianship to fashion a classic yet contemporary sound.  For the first time in years their next steps should be watched with interest; MSP always were the band that likes to say Yes.