As with much of the great stuff that Karaoke Kalk puts out, it is genius pop music for a parallel (and more fun) universe than ours. 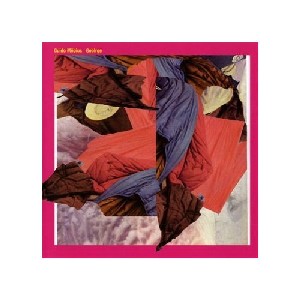 The Karaoke Kalk label is a consistently fine purveyor of slightly skewed pop music and their latest release – Guido Mobius’ Gebirge – is no exception. It’s an album of spastic electro funk pop (is that an identified genre yet?) that is as brilliant as it is demented as it is fun.

Opener Niemens starts with strange vocal mumblings before handclaps, wonky funk guitar and swathes of electro feedback join in. The vocals are by a chap named Go:Gol – I’m not sure whether he deserves a hand shake or a kick up the arse for his chosen moniker but still. His vocals are, as far as I can tell, not in any language but are Dada-esque in their invention. As the track builds it finds a beat and a groove and even time for a bit of nifty whistling.

It’s a good opener but the standout track of the album follows, I am William Kamera. More semi-funk guitar, the sound of things being dropped on the floor, weird boings, brass no more proficient than the guitar, more ranting from Go:Gol; the whole ridiculous confection making no sense whatsoever but somehow holding together. And then we get a bit of a beat and the thing stutters into life. Swirling guitars and a big beat take it on to another level and it actually, genuinely, is a catchy dancefloor number. Well, for a few seconds anyway. Then everything cuts away apart from beat and voice until the whole thing builds up again…Despite my description it is without doubt one of the most fun (and funky) things you’ll hear this year.

Elsewhere Dig A Mammoth is beaty and jazzy, with hints of easy listening.

Sssplitter starts off sounding like a Brian Eno song from Nerve Net (funny how influential that album seems to have been, despite not being one his better known efforts). Repetitious beats join more wonky funk and brass. Gosse Overman is a crazy pop song – its DNA is all pop – catchy tune, whistling, gentle beat – but the actual results are nothing like a ‘normal’ pop song at all.

With modern technology being what it is, it is pretty easy these days for one man and a laptop to be able to create such a kaleidoscopic mixture of musical genres. Most of the time though the results are inert: like bunging a gospel choir on an otherwise bland rock song, the mixture of genres often obscures rather a prosaic writing process. Not so with Guido Mobius. These songs are on the one hand micro-managed snippets of samples and live instruments, on the other they are imbued with a joyous freedom of expression. Moreover, despite the range of styles and genres the album is undoubtedly his: it sounds like no one else. As with much of the great stuff that Karaoke Kalk puts out, it is genius pop music for a parallel (and more fun) universe than ours.