As for Blue Skies, that one’s so Sarah Records it almost had us wishing Incendiary was actually published on badly photocopied A5 and sold for 50p with a flexidisc from a rack next to the latest seven inch indie chart contenders. 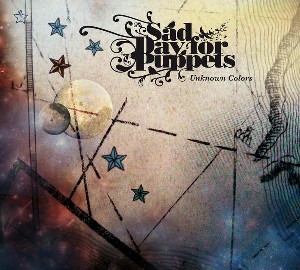 Sad Day For Puppets arrived in Manchester on a rainy Wednesday, carrying their instruments on their backs because they couldn’t even afford a van for their UK tour, for a gig at a suburban Irish social centre which was just clearing up after a wake. Far from being deterred by this somewhat disconcerting welcome, by the time we arrived with the amps they were borrowing from support band Air Cav and happily tucking into the left-over sausage rolls. It wasn’t the best attended gig on their trip; they could have thrown a pop star strop about the space in front of the stage – instead they instigated a dancing contest with a promise of a copy of their soon-to-be-released album for the fan with the best moves, and turned the night into their own little party. NME said it was rubbish. NME missed the point.

Imagine, if you will, Teenage Fanclub fronted by a blonde Swedish lady. Right, while the male contingent of Team Incendiary disappear to the shed to enjoy that thought for a few minutes, what else do you need to know about the latest slab of aural wonder to emerge from Sonic Cathedral’s seemingly endless stream of such? Well, back in February when the nights were still dark and cold, a little shaft of sunlight sneaked in through the drawn curtains of gloom-pop and industrial electro-mess here at Incendiary’s Mancunian outpost. It smiled, did a little dance on the windowsill and sprinkled sparkly pop-dust all over our winter misery – it was Sad Day For Puppets’ Marble Gods and for a glorious three minutes and forty five seconds its fuzzy guitars, pretty vocals and insanely catchy chorus hook reminded us what indie pop used to be like. Now they’ve unleashed whole 13 tracks of it, and somewhere along the way they invent candyfloss country. Er, countryfloss? Whatever.

From the opening TFC-meets-60s-girl-group love-in of Little Light to the nursery-rhyme jangle of the final Withering Pearls And Dust, this is an album to make you smile. In between there’s that brilliant single, its equally gorgeous follow-up Cherry Blossom which sounds like Creation Records when they were all floppy fringes and polka-dots and could actually have fallen off Primal Scream’s first album, the sweetly sad little ice-pop-melting ballad When The Morning Comes and several tracks that sound like The Velvet Underground And Nico if their preferred choice of white powder had been sherbet fountains. As for Blue Skies, that one’s so Sarah Records it almost had us wishing Incendiary was actually published on badly photocopied A5 and sold for 50p with a flexidisc from a rack next to the latest seven inch indie chart contenders; (In all seriousness, so do I – Ed).

Too cute to survive in this harsh modern world then? Well not quite. There’s enough bite in the guitars, enough dirt and distortion, enough choruses that rock out (admittedly in a way that’s hardly going to trouble the neighbours too much) and enough heartbreak in Anna Eklund’s bittersweet voice to set it way above the infantilist ankle-sock-wearing twee-pop revival brigade. This is quite simply pop music how it should be. Now, do you want a couple back issues for 30p and a stamped-addressed envelope while you’re here?

Pic: Courtesy of the band