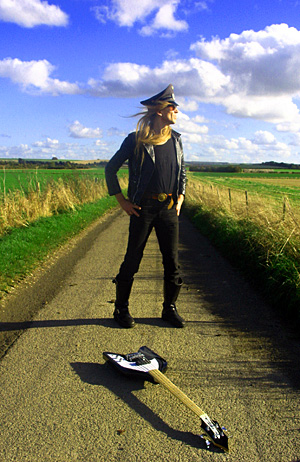 Julian Cope’s in the rear view mirror. And he’s getting agitated. We’re skulking along the Embankment in London getting ready to make like Guido Fawkes and launch a heathen-folk attack on parliament. But this needs to be well organised: there’s film crews, musicians and parking charges to aware of, not to mention the expected police intervention. As the convoy heads in circles around Millbank tower the plan is agreed upon and I’m given a handheld camera for surreptitious filming in case the crew’s equipment is seized. Numbers are swapped in case of arrests.

And then they’re off. They being the motley crew of Julian Cope, sometime pop star, sometime leading expert on megalithic structures and his assorted musicians, all dressed in leathers and hefty boots and beating out their chants from the start. Then there’s a camera crew consisting of four affable Hartlepudlians and a Scandinavian photographer, followed by a couple of guys with placards in support of womens’ rights, and a bloke in an 8ft costume of a giant baby that goes by the name of Sqwubbsy. Across the road, into the grounds, towards parliament. And the song goes up… “To rally every black sheep is my goal…”

A month later I’m standing in the middle of Avebury stone circle in Wiltshire. It’s a damp, misty November afternoon and I’m waiting for my date with Mr. Cope. It’s been rearranged several times, adjusted to fit around additional filming for the Black Sheep DVD but eventually the message comes through. “3pm, Cove Stones”. I’ve been promised a chance to “discuss how to transform this nation into pro-active motherfuckers”. Being an inactive twat, this is good news. It’s not a time to relive old anecdotes, talk up past feuds from the ‘80s or discuss exactly how he managed to get ‘Jehovahkill’ released on a major label. This is time to understand why this punk’s more active and creative than ever at the age of fifty-one.

As the clock heads towards four o’clock an enormous pick-up truck draws up by the stones, blocking half the road. A grizzly bloke, half-biker, half-hippie and dressed as a Luftwaffe pilot screams at me. “JIM! Get over here!” The filming’s late and we’re talking as Julian careers around the Avebury complex co-ordinating the final shots for the upcoming DVD.

IN: Why all the work with the film crew?

JC: Because I met some motherfuckers – ­these guys are real motherfuckers and all I’m looking for is evidence that something is worth doing. I’ve not been filmed since a very unfortunate BBC2 experience in 2000 based on ‘The Modern Antiquarian‘. I hated it. I didn’t want to be a TV presenter. They managed to use every ‘safety shot’ from film as the actual shot in order to make me look like a TV presenter. I really knew those guys well and even then it didn’t look like what I wanted to be. So I just thought that I won’t be filmed for anything.

IN: What’s the central concept behind this work?

JC: That we unite or die. Our culture is a really rich culture, full of people who are incredibly singular. But it’s hard to unite singular people because they’re all so obstinate and on their own trip. So what I figured I need to do is to pick people who are confident enough to be on their own trip but who recognise that in separation there is a weakening. We need to bring people together who even in their obstinate singular-ism recognise that there are other singular people who are useful to hang out with.

IN: Why the sudden need to unite these people?

We pull in to a lay-by and start the walk up the gentle slope to the Long Barrow at Beckhampton. When we get to the top Julian will clamber inside to explore the possibility of filming the band inside. All the way he never stops talking.

IN: Do you want us to just accept that as a statement? Or are you just trying to provoke us?

So I said “well, that’s two choices that I can go with”. And I thought “why is it black women who are confident?” – You’d never get an English woman doing that. The next time, coming out of the services on the M4 a black woman came up to me and said “I think your look is incredible, you look gorgeous”. So I asked Michael O’Sullivan who plays acoustic guitar what it is with black women, because he lives with a Nigerian woman. I get liberals coming up to me and they ask “is where you come from dodgy?” How come the only people that don’t have a problem with me are confident people, black people and people who aren’t hung-up about their sexuality? And I just think that rock’n’roll is just a way of getting us out of our sexually repressed, Lutheran lives.

IN: So why are you only interesting in the people already on your wavelength?

JC: Because the scattershot approach of Christianity is totally pointless. Christians stand in shopping centres at weekends preaching but the only people they’re going to appeal to are people who are truly fucking lost. They’re looking for anything. I’m only looking for people who are already looking themselves. I’m only interested in talking to people who might inform my trip. I’m not interested in talking to you if I think you’re only going to listen to what I say; I know that there’s a good chance that what I say might have flaws in it. But I’m trying to appeal to someone who’s thought about it. You might pick holes in what I’m saying right here and I might then have to go “fuck man, you’re right”. Otherwise I’m just going to turn into a cunt. Men have an amazing ability to turn into cunts and what we have to do is constantly live with a very, very rich dialogue.

The Black Sheep’s Joe Strummer Memorial Busking Tour is typical of what makes Julian Cope worth listening to. It’s a glorious series of gigs, carefully planned to take in intriguing places across the entire country that have inspired or affected the Archdrude’s way of thinking. It’s a publicist’s dream, something to connect with the fans and provide reams of material on this new outlet for his interests. But nothing’s that simple with Julian Cope. The information is only released online three days ahead of the tour’s start. The locations and justification for the choices are provided but there’s no hint as to times. Even worse, some sites don’t even seem to exist in any records. Working on a tip I turn up at 10am at a statue of Thomas Carlyle by the Thames in Chelsea. Two other fans are there. Except it turns out that they’re the crew; no one else is here. As the late autumn light filters through the trees in this gentrified part of London the show begins.

The Black Sheep, the latest incarnation of Julian Cope’s solo band are an assortment of the chemically damaged and the intellectually fired-up. There’s a certainty in their minds and they enact the clear vision of their leader as they head around the Georgian town houses towards Carlyle‘s memorial. Entire coach loads of tourists heading from the west into the centre of the metropolis turn their heads at the sight. Workmen slow down and hoot their horns. A retired bloke in his mid-80s dances past while walking his dog in the crisp light. I’m sitting on a tree stump watching the show as passing pensioners consider whether they do want the world to shut its mouth. Five songs and a rendition of ‘Rock the Casbah’ later everything is perfect. Any thought of returning to the mundane grind of University courses is gone. For the day I’m going to be a black sheep.

IN: You had a chance to become the pop star, the guy who was preaching to others. Why not take advantage of that and sell people your views?

JC: Because in that case dialogue breaks down and you become part of a personality cult. You start to drag people along who are actually hoodwink-able. And I don’t want to hoodwink people; I want people to know where I stand right from the beginning.

You may be confident enough to someone who looks like this. Most liberals see this and say “I’ve got to totally discount him because he looks like a lunatic”. But by looking like a lunatic it means that a lot of people will ignore me and I want to make sure that those people who consider that style is less important than the internal will reject me. Humanity at its height is incredibly stylish, we spend 40% of our time preening and looking after ourselves. I can’t stand the whole trip of considering that “my internal is fantastic but I look like a right mess on the outside”.

IN: But you’ve changed your style and your views. Why should we care what you have to say right now?

IN: So where’s the drive? You’re out here filming a new DVD and working on new projects while the Bunnymen are playing another reunion tour?

JC: I’ve got an overwhelming feeling that where we live is a very important place. It’s a practical place for human beings to live. We don’t need gods because we have a natural fertile landscape. The only place that I’ve found where gods are really necessary is where there’s limited land and limited water. There you have to have gods because they have to become guardians of those places and you will be at war with the people who control the other water that you need. We don’t need to fight for it. But at the same time just because we don’t need to fight for it doesn’t mean that we can just take it for granted that it’s always going to be here. I want to celebrate my locale.

IN: How does talking to these ‘forward-thinking’ guys relate to the mainstream?

JC: It doesn’t. There’s no point in me trying to understand the mainstream. The only way the mainstream will ever change is through me turning people on who will inform the mainstream. So I have a frontiersman’s spirit so that I can speak to people who can make it more palatable that I can make it. I’m the tiger; when you see us moving around you know where you stand with us.

Last year there were seven of us who turned up on a trip to a Scottish festival. We get out for a break, we’re all tall and we all look like motherfuckers. But there were twenty-five Slovakian motorcyclists in this Little Chef and every one of them just got up and legged it as soon as we walked in.

Part Two is here, with JC giving us more on his views on religion. You can also access Part Three, Part Four and Part Five.