Hayden Thorpe’s wrought vocal is likely to be the deciding factor in an appreciation of the band, his unearthly delivery occupying the middle-ground, somewhere between Noel Coward and Billy Mackenzie. 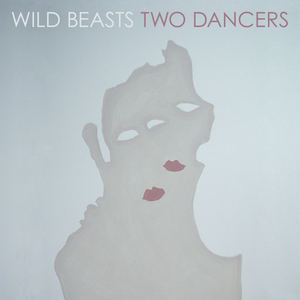 The second LP from Leeds-based Wild Beasts does not so much announce itself as stumble into the room half-cut, hissing threats into your ear, before surreptitiously attempting to leave with your ladylove.  In other words it is a vaguely unsettling experience, albeit one which fully demands your attention.  As with last year’s sterling debut Limbo, Panto, Hayden Thorpe’s wrought vocal is likely to be the deciding factor in an appreciation of the band, his unearthly delivery occupying the middle-ground, somewhere between Noel Coward and Billy Mackenzie.  Two Dancers hits its peak, however, when bassist Tom Fleming sings of “girls from Roedean, girls from Shipley, girls from Hounslow, girls from Whitby” in a pleasing northern burr.

The record kicks off with The Fun Powder Plot, Thorpe announcing that “this is a Freudian slip – my slipper in your bits” amid a dizzying piano and muted guitar arrangement.  A twin pre-obsession with the pleasures of the flesh and gang mentality seems to permeate the entire record: we hear of “frock spill like alco-pop around girls’ knees”, and, hilariously, “his dancing cock, down by his knees”.  That the latter is lifted from the entirely earnest two-part title track, a pounding post-rock number concerning sexual abuse, does not detract from the black humour.  Elsewhere on the chiming, stop-start This is Our Lot, the fug of the night club clears to find the boys “all quiffed and cropped… we hold each other up heavy with hops”.

The most cheering aspect of this record is the band’s readiness to deconstuct traditional pop music structures to fashion a sound which is at once classic and progressive.  It is to their credit that they and only a handful of other groups, including the recently reunited Field Music, are prepared to release crackpot singles like Hooting & Howling, an intoxicating tale of alliance with “brutes bored in bovver boots”.