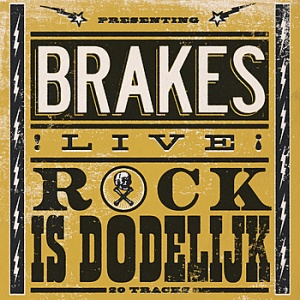 …this, their live LP, is an absolute belter, and one that captures the band in their purest, most undiluted form. Simply put, if you are to own one Brakes LP, then this is the one.

Readers of this magazine should, (if they have paid attention over the last 5 or so years), be under no illusions as to what we think about Brakes. So it is with great pleasure that we are able to tell you that this, their live LP (culled from a couple of shows in 2008 & 2009) is an absolute belter, and one that captures the band in their purest, most undiluted form. Simply put, if you are to own one Brakes LP, then this is the one.

Comprising a set list that covers all three studio L.P.’s to date, Rock is Dodelijk is brimful of the fizz and off-the-cuff fun that characterizes the band’s live performances. Live, Brakes are loose, playful and a little bit more psychotic than any listen to their insightful "country punk" studio LP’s would suggest. Eamon’s howl is more pronounced live, though it’s a shame that this normally urbane and chatty front-man wasn’t recorded between songs. Still we have a marvellous, “Ollie Reed” moment before the storming and gnomic Huevos Rancheros… And while we are on the subject of Mr. Hamilton: what is also noticeable is how prominent the lyrics are on here, there were times when a listen to a track like Don’t Take Me to Space (Man) or What’s In It For Me? prompted a re-evaluation of precisely what yer man is on about…

The other noticeable thing is that the chosen “set” has captured pretty well on the nail how good and confident a live act they’ve become. They were always extremely competent musicians from the word go, but now, with a few strenuous years of gigging under their belts, they really sound phenomenal, especially as they approach re-creating their material as a fresh challenge each night, (check out both versions of Hey, Hey as proof). The thunder and elasticity of the rhythm section is perfectly captured on here, as are Tom’s pedal-tastic heroics; as heard on a brilliant Isabel and Disco Party.

Now, the live rock LP – from bands outside of the heavy metal spectrum – has a justifiably bad reputation. There are classics of the “genre”, Bowie’s Stage, the Bunnymen’s Swedish tour bootlegs, Roxy’s Viva and Live at Leeds spring immediately to mind, but on the whole I can’t play these kinds of records as entertainment, even when it’s an act I love. Rock is Dodelijk is one of those LPs that may well become such a favourite, mind. Once again, I entreat you, even if you don’t own anything by them, or haven’t really connected with their music to date; you really need to give this record a spin.