The music is very much the sort of fun, throw–away affair that will either entrance you or piss you off completely. Personally speaking, I enjoy it lots. 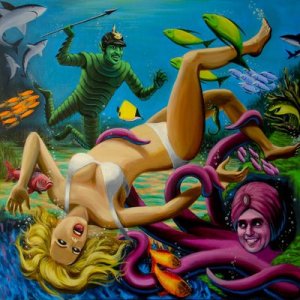 A funny record; equal parts comic doo-wop, driving rock and garage slob fest. A measure of where this disc is coming from can be gauged by the cover artwork. We are presented with a submarine scene; where a purple octopus with a turban and a green goblin with webbed feet and hands (carrying a spear and wearing a pickelhalbe) entrap a blonde lass; who seems to have lost most of her clothes.

The music is very much the sort of fun, throw–away affair that will either entrance you or piss you off completely. Personally speaking, I enjoy it lots. The low-key opener, Anala isn’t that memorable but things do pick up considerably with the cod-60’s strut of Invisible Girl which nearly breaks into Felicity near the end. More 60’s rip-off fun is to be had with I’ll Be Loving You, which sounds like Sam Cooke gigging with a bunch of 13 year old Status Quo fans on practice amps. Animal Party is a great garage thrash that isn’t a million miles away from the Animals (replete with some fabbo pig oinks) and Spin the Bottle is an unholy alliance of Buddy Holly and Chuck Berry moves that somehow keeps on it’s feet for the duration.

If you’re still in a light-hearted mood then check out the fabulous Truth or Dare which is the best rip off of Warsaw’s Warsaw, probably ever. Crystal Ball is pretty tremendous too with its riff-tastic assault covering a number of key changes in a very short space of time. And Do the Chop is a fine closing number, at times bringing up a jangle that the Bunnymen wouldn’t be ashamed to use – albeit with a wee bit of help from In the Midnight Hour’s bass line….

A lot of fun this; just ensure you’re in the mood.