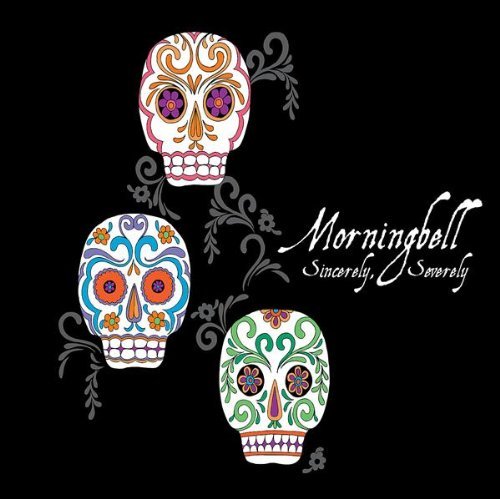 Morningbell are obviously trying to be seven different bands at the same time but they pull it off, somehow.

Morningbell are obviously trying to be seven different bands at the same time but they pull it off, somehow.

Sincerely, Severely has something for everyone. Honestly. Opening track Let’s Not Lose Our Heads sounds like Supergrass having the time of their lives, Marching Off To War sounds like the Flaming Lips hitting each other with sticks and Hello, Dali sounds like the Killers and Curtis Mayfield playing a benefit concert together. Get the picture yet? And we’re only three tracks in! I must warn you, however, that you may feel an uncontrollable desire to tango round the living room with your partner during Stay In The Garden but if that’s not your cup of tea then perhaps you’d like to Samba your way through a bottle of white rum while listening to The Blue Whale and the Fly? I tell you, there’s more going on in here than there’s any right to be but you won’t mind at all.

Morningbell are obviously trying to be seven different bands at the same time but they pull it off, somehow. It helps that there are more musicians involved here than in a school band competition – there’s even a dog hiding in there somewhere, I kid you not! – but ultimately what drags this away from being a complete, incomprehensible mess of album is that everything is so cleverly arranged and well thought out. They may well throw the kitchen sink at you half the time but there’s a reason they put that accordion next to that Spanish guitar in The Blue Whale and the Fly and that’s because it WORKS.

I can’t praise this album enough, simply because it makes me grin from ear to ear and it gets better with each and every spin. Whether they’re trying to be Barry White or Damon Albarn, whether they want to make me dance or dim the lights and snuggle up next to a loved one, they’re bloody good at it. If you can listen to Pictures Of the Sun without wanting to dance then there may well be no hope for you at all and you should seek medical assistance as soon as possible. This is a truly astonishing record, if only because you probably won’t believe what you’re hearing half the time. There’s even a kazoo solo!

Immensely talented, unbelievably confident and quite obviously insane, Morningbell have blossomed into a band of real power and purpose, although they probably haven’t realized it because they’re just having too much fun. If they carry on in this fashion, they could accomplish anything. With this record, Morningbell will take you on a journey you won’t want to miss, I promise you. There hasn’t been another album released this year that is as much fun to listen to and for that we should cheer and applaud them for it. In fact, we should do backspins and swallow dives, just for the hell of it. We should foxtrot down to the high street, quickstep into the record shop and demand this album whilst spinning plates on our heads and juggling chainsaws. It’s that kind of album.