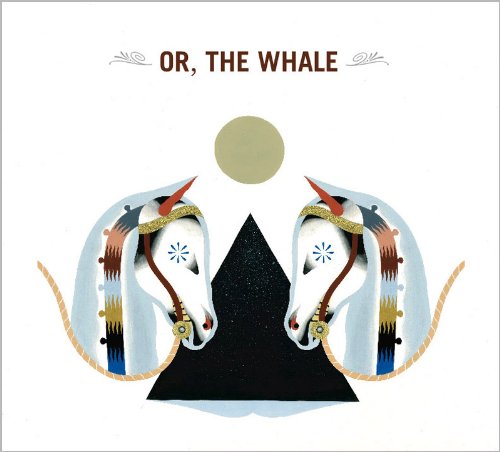 Eagerly anticipated. It’s a phrase that’s normally attached to posters of films you’ve had no prior knowledge of, or is slapped all over the cover of a book in large type whose author apparently won a prize a few years ago and has finally stopped having a sabbatical and strung a few thousand new  words together.  It’s the kind of phrase that marketing and PR people use when they’re trying to flog something that isn’t really any good. When you see the phrase ‘eagerly anticipated’ you should instantly realize that the artist in question has returned from sabbatical/exile/bout of depression and produced a worthless piece of rubbish that nobody in their right mind should want to waste their hard earned money on. It’s a phrase that can’t really be trusted, which is why I hope that you take none of that into account when I say to you that here we have a record that’s been eagerly anticipated here in the Incendiary shed. It has, honestly.  Thankfully Or, The Whale’s sophomore, eponymously entitled long spinning record doesn’t really require me to use phrases like ‘eagerly anticipated’ because it speaks for itself. It’s a fantastic record and one well worth wasting your hard earned money on.

What’s most impressive about this second album is how much they’ve developed their sound. Although there’s still a lot of ‘Americana’ in the mix, with banjos and steel guitars floating around all over the place, they really seem to be developing their own sound now. Light Poles and Pines, their debut album, was a very accomplished piece of work but compared to this it feels nostalgic. It was beautiful, yes (and is still a firm favourite in the incendiary shed), but if that was the bare bones of Or, The Whale, they’ve now started to add some muscle to that skeleton and it’s made them seem a lot more powerful. The opening track, No Love Blues signals the changes immediately, opening as it does with a punchy piano part and closing with a wonderfully scratchy guitar solo, but head over in the direction of Black Rabbit to get a better idea of what I’m talking about. Black Rabbit is one of the standout tracks on this album, it pulsates with a kind of brooding intensity that was completely absent from Light Poles and Pines. It’s a powerful song that, in itself, proves just how far this band have come in such a short space of time. It’s a song that bubbles up some tension before exploding into the kind of chorus rooms full of people were meant to sing along with. It’ll makes your shoulder muscles tense slightly, it’ll make you want to throw your head back and forth in the way Neil Young does when playing an extended guitar solo and when that chorus comes around, just let yourself go and scream your lungs out to it. It’ll make you feel good.

Elsewhere on the album there’s the punchy Giving Up Time, which is another good example of how they’ve taken their old sound and slapped it into shape a bit. Terrible Pain sounds the closest to something that would have appeared on Light Poles and Pines and it’s a joy to wrap your ears around. Just listen to the way they knit the banjo and slide guitar together, it’s infectious. Shasta is a dream of a song, mainly because, like on Never Coming Out, Lindsay Garfield is allowed to step forward and take the lead and, let’s face it, I think she could sing the alphabet song to me and I’d think it was the most beautiful thing I’ve ever heard. That withstanding, it’s a beautiful song and I’m sure you’ll agree. To be honest though, you don’t need me to talk about every song, because they’re all good. There’s honestly not a bad note on the album – but please check out Rusty Gold, it’s great! If you’re a fan of their debut album, you’ll be more than impressed with this, but even if Light Poles and Pines didn’t sound like your cup of tea, I would still urge you to give these guys a chance. It feels apt that they’ve named this album eponymously, because it feels like they’ve really found their feet now. They’re no longer a bunch of musicians from the Bay Area playing together, they’re a band. And they’re good. So good in fact, they could very well be the next Wilco.

Incendiary eagerly anticipates their next step.