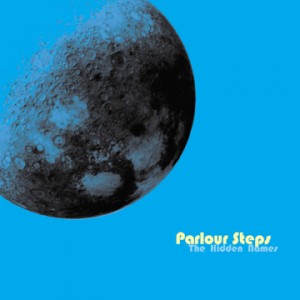 Vancouver’s The Parlour Steps are a bright, chirpy, indie band. The thing that’s most surprising about them is that they’re not a bunch of teenagers who’ve recently stumbled out of a garage with world domination on their minds. Instead, judging by the picture of them on the inside cover of this record, they seem to be a bunch of accountants who’ve gathered round the water cooler and decided that they should make some music together after hours. We can presume they found an affordable practice space because here they are with what apparently is their second album and it’s a triumph. Which isn’t exactly what you’d expect from a group of people you feel like you should be handing your tax returns over to but then we do love a surprise package here in the shed.

The Hidden Names is a fun little album. It’s filled to the brim with poppy, chirpy, grin inducing tunes, 13 of them in fact. These accountants give you value for money! Told you they were surprising. The fact that they’re not a bunch of spotty kids with raging hormones and a lack of talent certainly helps, I think, to describe how much care and attention has gone into this. There’s nothing sloppy here. The delicate arrangements betray a knowledge of music not normally associated with indie bands and it’s obvious they’ve taken the time to make this a ‘beautiful’ piece of work. That work has paid off in spades.

This album is exciting, not because of its passion, energy and promise of good things to come (which is what indie fans normally look for when a bunch of kids are involved) but because it sounds like a band on top of their game. The melodies are so catchy you’ll be humming along to them in no time and there are more hooks in here than in a butcher’s freezer, but that’s not all. It may bypass the attention span of many a young indie fan because this isn’t a direct album, but those of us old enough to know better will just smile at how clever, how intricate and just how bloody entertaining this is. Singer Caleb Stull sounds a bit like Loney, Dear. Well, if Loney, Dear cheered up a bit, but musically, this is more in Ben Folds territory and that makes for an interesting combination. In fact, they remind me a lot of Stars and if you’re a fan of their poppy antics – and let’s face it, you should be – then you’ll want to get a hold of this pretty quickly I would imagine.

This isn’t an indie album for the pogoing masses, but rather one for those of us who like to stand a few feet back from the stage, away from the mosh pit of sweaty kids and their pointy elbows but in one of those strategically important places where a) you’ve got a good view and b) you can get to the bar easily. It’s not really something you’ll want to jump up and down and scream along to, rather it’s something you’ll want to shimmy around the living room to whilst doing the hoovering. At the end of it all, The Hidden Names will sound good in a bar, at home or in the car on the way to work. It’ll make you smile and for most of us, that’s more than enough. At least it’ll make filling out those tax return forms a bit less of a chore.

The Parlour Steps. A band for those of us that are old enough to know better.