They still somehow remind me of the Soft Machine

They still somehow remind me of the Soft Machine 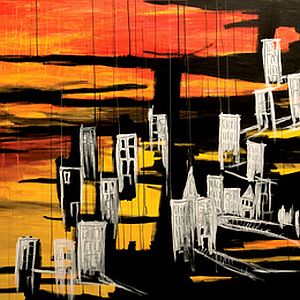 Now this is good stuff. Four work outs, each title from a word in the band’s name, two of them pretty jaunty, and very much in the band’s tradition. However, I have a feeling (based admittedly on memory of ten year old tapes) that all the other DMST recordings I have heard haven’t been as overtly rocky as this one. They still somehow remind me of the Soft Machine, maybe it’s the chord changes.

Anyhow, let’s turn our attention to the music on the LP. Do is sprightly enough, and manages to keep a consistently high energy level, though I think that’s down to the chiming, positive guitar part – which carries a lot of the track’s tempo on it’s shoulders and informs a lot of the textural  interplay (though there is a pretty dramatic sea-change in tempo near the end). Make starts life as a gaunt, streetwise strut backed by dry, ghostly (and incredibly quiet) synths, drawing on Joy Division’s Closer and Klause Schultze in equal measure, it seems. Things quieten down and become more reflective for a while before the track builds up – with the aid of a trumpet and a lot of growling guitar feedback – to being something fairly elegiac. A short, trippy comedown at the end of Make prepares us for Say, which is a very quiet piece of music to begin with. Slightly atonal, Say skips about in a discordant way for a minute or so before settling down into an empathic, melodic circle which dips and sways for a good five minutes. The last part of the track slows down to an unbelievable degree, but in some ways it’s a refreshing move.

Last up is Think which is a woozy moonlit stroll par excellence and a fabulous comedown.

Great LP, worth checking out.