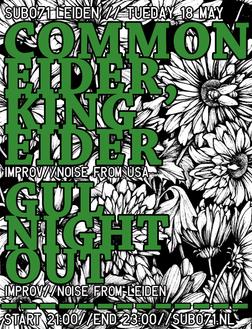 This is big music, people; big in its reach and ambition verging on monstrous in its execution.

This is big music, people; big in its reach and ambition verging on monstrous in its execution.

SUB071 is on a bit of a roll at the moment, not content with gigs in greenhouses and marvellous nights out with Kanipchen Fit & Jelle Buma, Marcel and Paul seem to be quite happy to conjour up the most extraordinary pairings of acts; all in the name of a good night out. It takes nerve to pair-up an underground Name with a bunch of art-school lunatics who you’ve never heard before; seemingly for a laugh. But that is just what SUB did with Gul Night Out and Common Eider King Eider

To call Gul Night Out (a four-piece boasting a menacingly camp singer who sometimes bashed dustbin lids), a bit mental would be an understatement. The band hung around for no-one and embarked on a very strange set indeed. The whole thing had the feeling it would completely fall apart at any moment, and some very abstract drumming did have one or two audience members wondering precisely when to tap their toes. But no matter, it was a shambolic, annoying, befuddling but ultimately glorious performance. The singer, in parts menacing, in others mincing, pranced about repeating a set of sardonic lyrics that were dark and slightly violent. Controlling his younger charges (they all looked about 15) with an imperious wave of his hand Mr. Singer ended the set with some furious dustbin lid-bashing about a foot from my face. I felt it to be a challenge, though in a funny way this was no bad thing…

Then a quick turn-around: (certainly in terms of the turn-arounds experienced at SUB where such matters are more “leisurely”), and time for Common Eider King Eider.

The night previous I had openly wondered on air whether the band saw their music as messy. It was a throwaway remark, based partly on panic over how to start a radio interview with them and part on blind ignorance; sure I knew Fisk’s work in Deerhoof, but well, Marcel had described their music as improvisation and left it at that… The band’s slightly bemused replies in the studio indicated that I was well wide of the mark with my musings. Just how wide was amply demonstrated at the gig: for if there is an epithet that could be used in conjunction with Common Eider King Eider’s sound, then it’s not messy, it’s epic. This is big music, people; big in its reach and ambition verging on monstrous in its execution. As befits the bands name (and, indeed it seems any band Rob Fisk’s been in; Badgerlore, Deerhoof) the music had an element of utter wildness about it; a quality that was sometimes eerie and often verging on the American Gothic. Think up a mental soundtrack to The Wendigo, or an Algernon Blackwood, story and you’re on the money. Add an undercurrent of Zen-like meditation (the music could literally float at points, informed by Conny Schnitzler- like, brooding violin parts from Gregory Hain and the titles (The Rabbits Will Come Again, When We Sewed Skins), and you get an indication what drives Fisk.

George Chen’s glistening slabs of guitar brilliantly informed the overall mood of the set, sometimes attacking, sometimes content to allow a brief sound-scape to settle and enmesh itself in the listener’s mind before raising hell. Fisk hammered the drums at one point, akin to a mountaintop sentinel calling some unseen horde to battle. And the effect was never anything short of glorious. As Mr F shouted out at one point, (to a request to turn the guitar down) “no man, it’s totally fucking rad!” Indeed, it was.

Afterwards I discovered that the singer from Gul Night Out had a very strange Germanic lilt to his voice, despite coming from Leiden. I also bought lots of nice vinyl, so good stuff all round! Oh, and check both these bands out a.s.a.p.