There’s a bear with sharp claws and it’s standing on a cloud throwing a jigsaw piece into the sky.

There’s a bear with sharp claws and it’s standing on a cloud throwing a jigsaw piece into the sky. 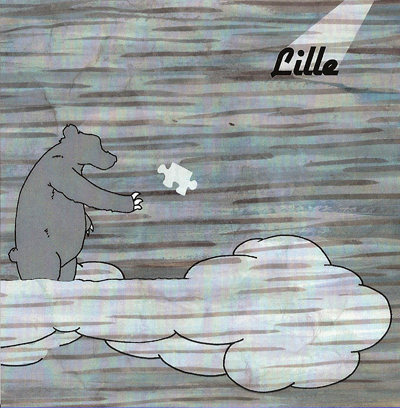 Lille is a town in Northern France. Their football team play in white, I think. Lille is also a teenager from Atlanta, Georgia and she plays a ukulele. It’s the one with the ukelele that we’re here to discuss. Apologies to any Ligue 1 fans.

There’s a bear with sharp claws and it’s standing on a cloud throwing a jigsaw piece into the sky. As a cover image it’s rather charming and pleasing although it’s about as colourful as the skies above Oldham around February. As for what it means, I’ll leave that to you to decide. The title of this little EP is Tall Shoulders, if that helps you any. Inside there’s a disc and on that little round piece of plastic are five songs, all built around a ukulele.

Now then, the ukulele is a pleasing instrument but its range is limited and it can sound quite slight. When it’s used well (Tom McRae’s Still Love You, for example) it can be a great thing, but at times it can be a gimmick, a novelty and a kind of half joke(check out the daft but admittedly wonderful Ukelele Orchestra of Great Britain).  Lille isn’t telling you any jokes, that’s for sure. She means business.

Things begin as you may expect.  Straw opens with a gentle strum on the uke, some bell chimes and some earnest, yearning vocals creating a lullaby that instantly charms you, before some drums arrive, brushed instead of beaten and the songs swirls itself up into something more powerful. Robert Cohn continues the effect, adding a throbbing bass guitar to build up a more solid structure, allowing the ukulele to float on top gently. The charm of the uke contrasts nicely with the bass and drums and the song creates a heady, melancholic brew that is at once beautiful and ever so slightly unnerving.

As Melancholera(great title) starts you may think she’s playing the same ukelele part all over again, and you may be right, but the guitar and drums soon arrives to things a bit more chaotic. The instruments seem to splash and crash around you, anchored only by the rhythmic strumming of that uke and an inspired vocal performance. As it heads towards its conclusion armed with anguished backing vocals Melancholera does more than enough to silence any doubts. It’s a great song. The title is the slightest track on here, but it’s still rather charming. Frankly though,  the rest of the EP is just a warm up to Blue Coat Boy, which is a triumph of a song. Energetic, strong and incredibly addictive, Blue Coat boy grabs your attention instantly with its poppy drum beat and playful guitars. Lille’s uke is almost drowned in all the excitement but it crests occasionally, just to remind you that it’s there. It’s the vocals that win you over though. Her voice is in fine form, the male backing vocals are incredibly pretentious and baffling and when she starts mixing whistles and extended ooh sounds things turn quite spectacular indeed.

For the final track alone, this is a must listen EP. But just what is that jigsaw throwing bear all about?