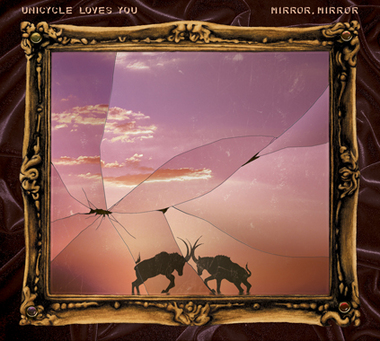 Who’s the fairest band of all? Frankly, who cares? Who’s the band that will make me smile from ear to ear and want to bounce round the living room on a spacehopper? That’s what I want to know. Well it’s Unicycle Loves You, that’s who. Their debut album was well received here in the shed and when the post child (seriously, our postman looks about 12!) dropped this little parcel into the shed it was thrust excitedly into the stereo, where it has remained spinning for days.

Mirror, Mirror is a blast, but it takes a while to get up to speed. The opener is little more than an introduction, but it flows straight into Quagga which is a perfectly pleasant little pop song but one that’s pretty throwaway. Time Bandits is a bit better but fans of their debut may be forgiven for thinking the band have grown up pretty quickly and shed some of their more childish and joyous elements for the sake of clarity and emotion. It’s fair to say that they have, but then Teenage Ghost House comes along and bounces round your head like a one of those powerballs you used to have as a kid. It’s incredibly catchy, completely infectious and an absolute belter of a track. From here on in, I suggest you hold onto your hats as this album turns into a real thrill ride.  Mirror, Mirror quickly turns itself into the audio equivalent of a National Touring Car Rally stage. Through a forest. At night. This album hurtles round blind corners at high speed, building up a sense of excitement and dread because you know that at any point you could come off the road and wrap yourself round a tree or end up at the bottom of a ravine suffering from severe spinal injuries. I tell you, Mirror, Mirror is relentless when it gets going.

The Wickedest Man In San Francisco is a twenty minute white noise epic that they simply cut the last 18 minutes off. Justine is a mosh pit waiting to happen, Mountain Lungs is so sharp it should come with a safety cover and the title track sounds like St Etienne singing the Jesus & Mary Chain. In other words, it’s a complete mish mash of an album but it’s never less than fun and more than occasionally thrilling. Check out There’s A Giant Walking In My heart, which sounds like half a dozen alking Heads albums condensed into two minutes and forty nine seconds.

Unicycle Loves You and frankly it’s about time that we reciprocated.