We are in the world’s biggest shop. Seriously. We were wondering how easy it would be to find, following a tip from a friend and a quick google of the address – but you can see it from half a mile away; you can probably see it from space. This is Saturn, five glistening football-pitch-sized floors of electrical goods, where OMD are to play in the music department – which takes up the entire top floor – at 5pm. This appears to be nothing to do with the Reeperbahn Festival, but it’s damn convenient. Early arrival being advised at such things, we amuse ourselves by moving CDs of bands we like to the front of their respective racks, in between being seriously impressed by some of the more obscure selections available to the discerning Hamburg music fan in this, a mainstream department store. I’ve never seen, for instance, the vinyl version of 65daysofstatic’s latest in a British shop – and fuck me if that’s not the limited red seven inch of Exit Calm’s Hearts And Minds… 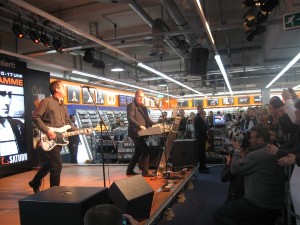 "Our one source of energy, the ultimate discovery"…. OMD tonight consists of just Andy McCluskey and Paul Humphreys – proper OMD, original OMD, pure OMD. None of your guitars and drums nonsense, although McCluskey does wield a bass a couple of times; this doesn’t prevent him doing his classic Drunk Mime Artist On Strings twat-dance AND WE WOULDN’T HAVE IT ANY OTHER WAY! He is 51 years old, he looks like David Cameron’s rougher brother, and none of this matters because electropop that’s not ashamed of the Pop bit is back, and so are its one-time kings. There are two new songs in this five-song set, and one of them – History Of Modern Pt.1 – is as good as any of their classics; in it Paul Humphreys – just a year younger than his bandmate and old enough to have physically spawned all the modern-day bands that carry echoes of his 80s work – has written officially the best synth riff of 2010. And hot on its heels comes the best synth riff of that decade not exactly short of such – Enola Gay. Simple, effective, perfect pop.

Back at the Reeperbahn (one pizza later) we like the fact that the main stage is giving a platform to local unsigned acts, this way their mates can pop down and watch them without coughing up for a ticket yet they still get the chance to impress the festival crowd, plus passers-by and the well-oiled St Pauli FC post-match contingent. Opening proceedings tonight are GO ASTRONAUT who do Editors-ish atmospheric-indie-with-synths – and frankly do it at least as well as Editors do. They look terribly nervous, but then they’ve probably never played to a crowd this size before.

And then we go to church. St Pauli Kirche, just a minute or two’s walk from the insanity of the Reeperbahn, is an oasis of tranquillity (with the cheapest bar of the festival – 2€ a beer!) and first on is Norwegian SILJE NES (and her two companions, on violin / bass and drums / electronics / glockenspiel). Silje herself plays delicate guitar, occasional flute, and sings – absolutely beautifully, in a crystalline Scandinavian-accented half-whisper. The result is gentle waves of slightly shoegazey warmth; organic but not afraid of technology, think maybe Kyte on an introspective trip. Not that this trio are in any way averse to building up the sound when it suits – Branches for instance dips into full-on Sigur Ros-ness; there are a couple of tunes here not a million miles from Sad Day For Puppets’ alternative Scando-pop whilst a later tune ends in Slowdivey towers of echo and delay. Candlelit and with the seated (and incredibly respectful) audience it feels a lot later than the half eight or thereabouts it actually is. And the mayhem out there’s going to be something of a shock to the system after this! 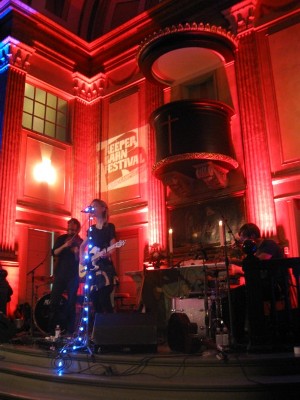 You often hear bands talk of toilet venues, but Silber Club with its graffiti-strewn yellowy-beige tiled exterior is the first I’ve seen that actually looks like one. From the outside, that is – inside’s a nice little basement club in which are TIAN doing relatively straight-up moody indie rock with an interesting twist: a traditional Chinese stringed instrument (the name of which I forget, it’s somewhere between a dulcimer and a small koto). They are in fact Chinese and, I think, the first Chinese band (as in not Anglo-Chinese or Chinese-American) I’ve ever seen. So to be honest you can forgive them the fact that their sound, part cloudy post-punk part 90s alt-rock) isn’t the world’s most original – China is currently at the stage musically that Japan was at maybe 20 years ago where looking rock’n’roll cool (which they undoubtedly do) and borrowing heavily from your fave Western alternative bands is still quite innovative. Their 2002 debut album was the first "rock" album ever released by a Shanghai band on a local label. Hamburg and the Reeperbahn might well have changed immeasurably since the Beatles’ days, but these four young men and one woman from Shanghai it’s probably at least the same sort of level of culture-shock.

Back in the church (these two venues are just a couple of minutes’ walk apart) cotton-wool-haired MODDI (AKA another Norwegian: Pål Moddi Knutsen) is wailing over a rumble of accordian and string-based thunder. "Every note of his music breathes the northern life-force, is inspired by the force of nature’s creation" explains the guide-book. Slightly OTT maybe but we can see where they’re coming from; close your eyes and you might find your mind filling up with images of geysers going off and birds migrating. Might be the cheap wine, though. And full marks for wearing a truly terrifying jumper of the kind for which his country and its 80’s pop exports were well known, seeimgly without irony. We’d love to stay, but…

Continuing our whistle-stop tour of the world in music, next stop is, um, Barnsley. Or at least the Silber Club again, where South Yorkshire’s EXIT CALM are midway through their first ever German tour. We caught up with them outside earlier and they’re having a brilliant time, buoyed by the decent treatment a touring band at this level gets on the continent compared to back home. And I am suddenly really excited. Yes, we’ve seen this band about 25 times, from minuscule basements to Academy and Ritz support slots, but the first time you see a band you love on foreign soil is always something special. We’re buzzing watching the club fill up – the guide-book’s bigged them up with U2 comparisons (don’t get that myself, but I know others who do), the intro tape’s running – here we go then…

They launch into You’ve Got It All Wrong and they pretty much own the place from the start. It’s unlikely there are many here who have seen them before, although there’s a couple of people mouthing words – and having been watching them in one form or another for some years now I almost envy those seeing them live for the first time after hearing the album. Rob Marshall’s guitar fed through three amps simultaneously, Nicky Smith’s prowling stare and skyscraping voice – and OK, maybe some of the vocal melodies do have a bit of Bono about them now you come to mention it but Nicky’s passion and power comes from the soul as opposed to the ego, and as a frontmen he capturesyour attention as opposed to demanding it. Their live form’s been excellent of late and the sound’s been set up to do them justice – it’s three songs in before anyone, the band included, get anything close to a breather. "Where you going after this?" asks Nicky to nobody in particular, and then they launch into a We’re On Our Own so immense it probably doesn’t matter. U2 never wrote a song that good. And save for a couple of people checking watches against listings who clearly have a plan to stick to, nobody leaves during this set.

There are less than five guitar bands on this earth past or present who could follow Exit Calm on good form such as tonight’s and even register on our radar, and none of them are in hamburg this weekend, so it’s back to the church where NILS FRAHM is demonstrating, in his rather sweet and amiable way, that one man and one piano can be as intense and emotional as any rock act. He could quite easily have gone down the traditional route. slicked back his floppy indie hair and donned a tux and been earning shitloads playing the classics in stuffy convcert halls but he’s here expanding the horizons of a festival crowd – albeit one a large part of which have been in here all night – it’s more like a standalone show than part of the madness out there. But he’s the final act of the night, so it’s soon time to hit the streets again.

The Molotow is full by this point – as with last night the after-bands club night here is a popular one and people are getting in early. For a minute or two it looks like THE BLACK ANGELS will be our first fail-to-see of the weekend, but a large group leaves right on cue and we squeeze into the rammed basement. Never have we experienced quite so many people blatantly flouting a venue smoking ban, and we’re not just talking fags here. Mind you, these hairy Texans deal firmly in full-on space rock; distorted cathartic dirges and loud stoner blues. They also appear to have one member whose sole purpose is to bash at a floor drum. Ah, OK, he does strap on a guitar eventually. Somehow – maybe the distinctly fried-sounding vocals, maybe the vintage Vox Jaguar organ – they actually manage to sound more like the 13th Floor Elevators than Spacemen 3 or any of their own contemporaries such as The Warlocks or The Brian Jonestown Massacre.

By the time they finish and we squeeze our way out again through the now considerably bigger queue to get in it’s half twelve; live music options are limited and with its glittery staircase Angie’s Nightclub is about the last place on earth you’d expect to find someone called SPACEMAN SPLIFF playing, but there you go. A friendly looking singer-songwriter type with accompanying cellist he seems rather too nice for his adopted name – no idea what he’s on about but I’m sure it’s rather lovely. And as the evening ends in one of those notorious cocktail bars drinking the House Special (no idea – we identify tequila, coconut and pineapple but none of those can explain the sort of lobster-pink colour) our final verdict on Reeperbahn Festival: ace. OK, so we didn’t make any of the gigs in the table-dancing club or the Frau Hedi harbour-cruise boat (both actual festival venues) – reminders both that this is Haburg and not Brighton or London or Austin or Manchester or anywhere else you can gig-crawl with a wristband, but you can’t do ’em all.

They seem to have pitched it right with the number of tickets available too – all the acts we saw got a decent crowd but very few venues were forced to turn punters away from bands they wanted to see. You could buy a ticket for one, two or three nights making it more attractive to those who don’t live here or who have other commitments. There were big names on the bill too – Edwyn Collins, Donovan even – yes, THE Donovan – alongside a list of hot and hotly-tipped bands to rival In The City or SXSW. Any complaints at all then? Well, the weather could have been better, but you don’t exactly come to North Sea ports in September for the sunshine. Oddly we hear very few English voices in the venues themselves which don’t belong to band members – it seems Reeperbahn Festival is still undiscovered territory for the majority of British music fans, but we’re pretty glad we discovered it.