All Incendiary heads in the Netherlands should try to get to Attila The Stockbroker 30th Anniversary Gig! Here’s some bumpf courtesy of the promoters. 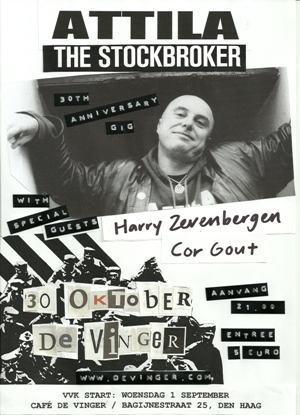 All Incendiary heads in the Netherlands should try to get to Attila The Stockbroker 30th Anniversary Gig! Here’s some bumpf courtesy of the promoters.

Radical performance poet and songwriter Attila The Stockbroker celebrates thirty years on the road with special guests Harry Zevenbergen and Cor Gout during a Punk & Poetry night in Café de Vinger. A night of spoken word, poetry, music, humour and politics. In 1980 Attila first assumed the stage name Attila The Stockbroker, after a short stint as a stockbroker. 2700 shows in 21 countries later his live shows are more intense than ever before. Attila will perform some of the highlights of thirty years worth of material, from Thatcher to the war in Iraq.

Attila has been visiting The Hague regularly since 1982. He became close friends with poet/ musician Cor Gout and played on several albums of his band Trespassers W. Gout will play several songs together with Attila and the musicians of Gekruld Haags. Former "Haagse stadsdichter (The Hague city poet) Harry Zevenbergen, another good friend of Attila, will perform his own material and deejay before and after the performances.