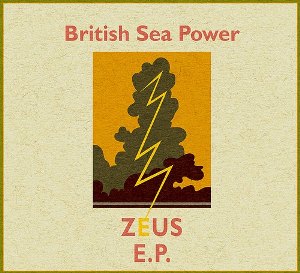 I have had three acquaintances with the name of Zeus in my life; one is the obvious, a little knowledge of the “oracular oak hero and destroyer of the Titans, turned symbol of the male as enforcer and fount of wisdom” (to paraphrase Robert Graves: The Greek Myths – pp 37-8, 55 etc., etc.). The second is the uneasy memory of a ridiculously vicious Alsatian, owned by a fairly mental Welsh mate of mine. The dog bit us – and him constantly, and I think it’s fair to say that there was little love between Zeus and the world at large. Which made it all the more surprising to us all when we learned that the only thing Eddie rescued when he burnt his house down was the bloody dog, (which bit him frantically as he stumbled into the street, face blackened, with only his undies to hide his modesty). The third Zeus “in my life” is the van commemorated by this EP, driven by Paul Tidy. We were once smuggled into the yawn-fest that is Lowlands by a very accommodating Mr T & band, and out again to the nearest train station; albeit in the face of a bollocking from Paul, as the van was carrying too many passengers for the insurance remit. So my memory of “The Zeus” is an uncomfortable one: being on my knees and elbows, and staring at assorted BSP “tour droppings” whilst Amon Düül II’s Yeti wailed and screeched on the stereo.

There is a reason for this preamble: namely to make the point that this record is multi-dimensional; slipping in and out of time, conjuring up many feelings and memories, (hence my ramblings) but always coming back to a core point; that this is the confident, settled and assured work of a band of peculiar power and vision.

In fact, I find that the Zeus EP is possibly the most “BSP” that BSP have sounded. In some ways the fragmentary & wide ranging nature of the musical stylings and approaches on the EP only help present the true “distilled” essence of the band: wild-eyed, cussed, romantic and pretty damned strange. The opener – and title track – is a case in point as regards the strangeness, what on earth Yan is trying to convey at times is beyond me. The stop-start nature of Zeus emphasizes its jerky psychosis. The song bellows and screeches, mayfly-giddy, it runs naked and unashamed, grabbing the listener and forcing them to submit to some kind of St Vitus dance. Quite apart from forming a mental connection between Rick Stein & Nicky Khrushchev (which is quite enough thanks), it glories in its ugliness and inadaptability: don’t be fooled by the winsome guitar run, that’s just camouflage. And what’s the yelling of “bingo” about?

Psychosis of one kind or another is found in all of the louder tracks; Can We Do It? could well be the sort of thing Roky Erikson conjured up in Rusk State Hospital whilst Mongk and kW.h are glitter-stomps of the most Neanderthal kind: lads out on the piss, drinking rum cocktails and murdering karaoke; all dressed at the Very Heighth of Fashion. kW.h has an air of Super Furries to it too (Golden Retriever anyone?), no bad thing at all, great minds drawing from the same sonic wellspring.

Sea Power’s dalliance with full-blown, unabashed romanticism probably reaches its apogee with the two Hamilton– penned “slowies”: the second is the surprise extra track after the psycho-blow outs of Mongk and kW.h. It’s a Kraut-folk collage drawing on Cluster and Ash Ra Tempel’s quieter dreamier textures, and some dewy-eyed folk Mike Heron/Vashti Bunyan style. The first, Cleaning out The Rooms is a masterful tease; building up slowly, constantly reinforced by shimmering strings and glistening guitar. It could be their greatest moment yet. And the more I hear it the more I think Hammy’s channelling Paul Buchanan’s stuff from early Blue Nile. The Blue Nile feel also hits home on the track penned by Abi Fry, Pardon My Friends; a soft soliloquy that is given the ghostly storyteller treatment by Yan. Bear is a masterful display of the band’s wistful dreaminess; the song turns on a sixpence about three minutes in and ascends ether-wards on the back of heady, sugar-candy keyboards.

Despite the band being comprised of the most personable of individuals, it is obvious to one and all that there really is no telling them what to do. And maybe it’s time we all accepted this. The record that will unchain Fenris and smash open the gates to another world is always within their grasp, probably more so now than ever, but maybe it doesn’t actually matter if they fail gloriously trying.

(This review is dedicated to Alan Spencer, whose benevolent and generous presence at many a BSP gig & meet up will be sorely missed. Long may the afterglow of his spirit brighten and inform us all. We miss you Alan.)