the musical equivalent of a security blanket

the musical equivalent of a security blanket 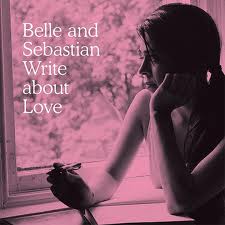 Reviewing Belle And Sebastian albums is one of the more pointless ways to spend an hour or so of your life. Why? Well, because anybody who knows anything about Belle and Sebastian will already have a pretty good idea as to what is to follow. If you’re not a fan of anything they’ve done previously then just turn around now and head off in the direction of a review you’re actually interested in because you’ll get no love here. You see, I’m a fan of B&S and I’m delighted to report that the long rest they’ve had has, essentially, changed nothing. Write about Love is a quintessential B&S album and it’s an absolute delight from start to finish.
There’s still a quaint air of foppishness hanging over everything they do and a kind of archness that sits uncomfortably with some people. It’s as if people can’t tell if they’re being serious or not. Here’s the thing, they’re just having fun or, at least, I think they are. They’re so wonderfully old fashioned, they’ve even drawn a line half way down the tracklist on the CD to signify Sides 1 and 2. I like that. I like that a lot.
Write About Love is exquisitely produced, impeccably played and every track is creatively arranged. In other words it’s a typical Belle and Sebastian album. For fans, it’s the musical equivalent of a security blanket, so just wrap yourselves in it. For the rest of you, if you’re still here, bugger off and listening to something less interesting instead.  You’ll never understand.