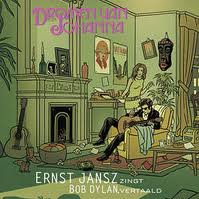 Honestly, I don’t know what to think. Ernst Janzz, well known here in the flat lands for his work with Doe Maar has decided, for reasons best known to himself, to record an album of Bob Dylan songs, translated into Dutch.  And that is pretty much that. It’s well meaning, for sure. It’s well played too but as to whether or not it was a good idea, I don’t know. I do know that I find that Zware Regen turns A Hard Rain’s Gonna Fall into something I simply can’t stop chuckling at but that may just be me. Admittedly, there’s nothing as ridiculously entertaining as William Shatner’s Mr Tambourine Man but nore is there anything as exciting as The Byrds’ version either. What there is, is a bunch of Bob Dylan songs, in Dutch, reverentially played and sung with a kind of earnest intensity that is at once impressive and totally ridiculous.
I suggest you make up your own mind, if you’re brave enough.