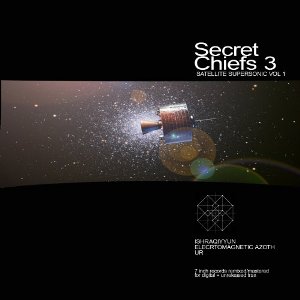 Another curveball of an album; and one you must devote a fair bit of time to get its measure. Satellite Supersonic Volume 1 is a trippy, drawn out affair, a compilation of old 7 inch releases and some unreleased material by bands that had some connection to the Secret Chiefs project.  And further, everything has been remixed for this release to ensure a further twist to the tale.

There; that’s the hard info over with.  As to the music, well it’s certainly psyched-out stuff (as befits the status of “remix”, I suppose) and full of references to traditional Afghan, Turkish and Middle East/Oriental music. The tracks initially veer between stately and reverential (as in Ishraqyyun’s  Balance of the 19) or downright confusing in its willfulness, (listen to Ubik’s Electromagnetic Azoth if you want to be baffled). There are some belting recordings on here though: Ur’s Kulturvultur is a remorseless track, flitting between some playful melodics (courtesy of a balalaika & electronic harp? I wouldn’t know) and a thumpingly monolithic drum pattern. The fifth track on here, Ishraqyyun’s Balthassaar: Melchior: Caspar is a bizarre but very charming mix of electronics (that verge on the squiggles blurted out in old sci-fi soundtracks from the 1970s – think Studio G) and a three-part take on an Afghan folk melody.

The Studio G feel is carried on with Electromagnetic Azoth’s The Left Hand of Nothingness which is a ghostly track enlivened by some crashes and bangs and the sound of breathing… Sci-fi Paranoia is enforced with UR’s Anthropomorphosis: Boxleitner and the last track (entitled Mystery Track on the CD I have) is a curious fluttery affair that eventually reconciles itself to documenting more Arabic influences.