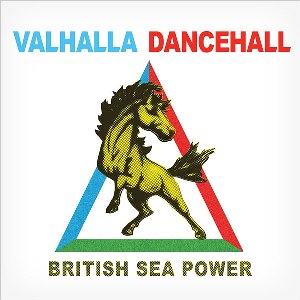 Like Janus, forever looking forward, forever looking back, Valhalla Dancehall – British Sea Power’s sprawling and multidimensional epic –can leave the listener confused and wondering how to approach it. At times VD feels like a crossroads record for the band, on the other like a resounding clarion call to everything they hold dear. For a record it has, on repeated listening, thrown up a lot of diverse mental images and connections, some striking. The first thing that got me was that Janus idea. After all Janus is the god of doorways, beginnings and endings, the symbol of future and past.  Then there was a painting; Poussin’s “Dance to the Music of Time”, (where Janus is also to be seen in the left of the picture). “Dance to the Music of Time” depicts an elaborate circular dance, played out by four dancers, some interpretations say the Muses, some the Furies, to the sound of Father Time’s lyre. Time is attended on by two putti, one blowing soap bubbles (significant of the futility of all human endeavour), the other holding an hourglass (showing that it’s later than you think). The dance depicted is a one full of twists and turns but one that is self-resurrecting, simple, and eternal.

Perhaps there is nothing more than this simple – but elemental – ritual dance at the heart of BSP, perhaps their genius – and genius it is, however unknowing or underplayed – is to tag us all along, lose us in the interlocking rhythms, steps and patterns, all the while creating an elaborate set of clues and false leads that lead us down ridiculous paths of misinterpretation, an almost hysterically nonsensical love, or just plain bafflement. What is special about this band? And why can’t/don’t/won’t people get it?

As befits the dual nature of this record, the music glides through a number of styles and airs, often in a gnomic manner that isn’t smooth or understandable. The songs don’t seem to link into a cohesive unit, giving the impression of a track-listing that was cobbled together. I would expect this can cause the listener to think that they’re being deliberately messed about with. And I would bet that this, more than anything will annoy those casual listeners tuning in for the first time. Doesn’t this band know how to put an LP together? Still, musings on how things can be done is to miss the point in some ways: BSP – like their musical antecedent, Julian Cope – don’t seem out to please anyone but themselves.

Valhalla Dancehall is also the platform that provides the clearest and most consistent contrast between the works of the two brothers, Yan & Hamilton, who in turn provide us with another musical contrast. For Yan, it’s a record of conflicts, whether internal, social, musical or inter-relational.  For Hamilton, it’s seemingly a recording of his spiritual contentment. Yan is at once fighting the good social fight on the stirring, (and Bunnymen-esque), Who’s In Control, arguing the toss with a girlfriend in Luna, and, in the brilliant but all-too-short Thin Black Sail, seemingly paraphrasing – for our amusement – some row or mental conversation he’s had in the pub. It’s an extremely personal, acerbic set of soliloquies that are in complete contrast with the icy and sometimes stilted mannerisms and generalities of his earlier lyrics. Even Yan’s more “traditional” songs, like Georgie Ray or Stunde Null, have a much more personal edge. He uses the words “we” and “you” a lot more than I seem to remember.  And his use of the word “fucking” is without parallel in BSP’s canon: strange times indeed. Hamilton’s work takes another course. Steady rather than fractured, and relying on the dreamy and impressionistic rather than schizoid expressionism, Hamilton’s trick is to overwhelm the listener by repetition, using  increasingly lush textures and catching the groggy listener on the hop now and again with a chord change of extreme charm (as in the Golem-like MongkII). Baby – a duet with Abi Fry – is a whisper that drifts, Ophelia-like through the shallows and the sweeping beauty that is Cleaning out the Rooms has the feel of a Gorecki passage. Another image to conjour with: Hamilton’s work – like Cleaning out the Rooms and Once More Now – with their hymnal reveries to the crushing beauty of the natural world creates an impression of great silence and stillness: like the Long Man of Wilmington gazing out from the portal he holds open.

So what to make of this record? Just think of contrasts: complex and simple, amateur and extremely assured, poppy and cultish, angry and content, looking forward and glancing back. It’s just British Sea Power doing their thing.