The rule in Europe is that you finish your drink BEFORE you go into a bar.  In N.A. it’s the other way around.  I am always amazed that such a simple change in thinking can have such a profound effect on the people you meet.


The rule in Europe is that you finish your drink BEFORE you go into a bar.  In N.A. it’s the other way around.  I am always amazed that such a simple change in thinking can have such a profound effect on the people you meet. 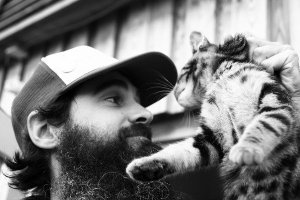 Incendiary recently got a chance to speak to Craig Bjerring – known to his audience as Oldseed. We’ve long been fans of his acerbic, questing music, and we’d always promised to chat to Craig (normally when we’d both had enough alcohol to forget what we’d said to each other) but events just got in the way. Craig is an affable soul, hailing from Canada but now resident in Germany, from where he seems to launch tours on a regular basis, in fact he’s on the road through Europe as we speak.

IN: Craig, you travel a hell of a lot round Europe. Like one of those German carpenters apprentices! What is it that fascinates you about Europe?

O: I think my favourite thing about Europe as compared to North America is this. The rule in Europe is that you finish your drink BEFORE you go into a bar.  In N.A. it’s the other way around.  I am always amazed that such a simple change in thinking can have such a profound effect on the people you meet.

IN: How on earth do you get about? There is a dedicate network it seems – certainly in Benelux and Germany -that helps out a lot of similar artists…

O: Ever see Planes, Trains and Automobiles??  ha!  There is a great network of folks most of whom I have the honour of calling my friends.  Everyone tries so hard to just make cool things happen.  You sit around and wait for shit to happen and you’re gonna die pretty unfulfilled, I figure.  One of my favourite things is when i meet someone and they say “so and so were here last week.  They say hi!”

IN: And what do you prefer rocking out or the intimate, acoustic shows? You seem comfortable with both…

O: This is one of life’s great mysteries…and I ponder it a lot when I’m sitting around (which is a huge part of touring).  This is how I feel today.  Playing shows is more fun solo.  I’ve always preferred to travel solo because it forces you to reach out to strangers who can then become friends.  Playing a show is much the same process for me.  Touring with a band is a big hassle that doesn’t reward as much as it should.  But rocking out is SOOO great.  I don’t need to do it on stage; in fact, I prefer jamming than performing songs with other musicians.  So when I have some free time, I get together with friends smoke a bit, drink a bit and jam…like hippies!! So I guess each fulfills a different need for me.

IN: I always enjoy your wisecracks when you’re onstage. You seem to enjoy a bit of banter with your audience.

O: That, I guess, speaks to the last question.  For me, it’s all about making a connection.  I get pretty into my songs so a bit of rambling is nice to shake off some of the fuzz that comes with trancing out.  I’m glad that some find it funny.  Otherwise it would be really weird.

IN: Tell us about your new record, what are the ideas behind it?

O: Well…in some ways The Reveal (2010) is a follow up to The Terror (2009). They are kind of companion pieces, insofar as the ideas go.  It’s sort of a call to release all the existentialist terror stuff that I funnelled into on the last record.  Basically the two records say “we’re totally fucked in every way imaginable” and then “who cares?” although there is a bit of the first idea in the second record and vice versa.

IN: Your music deals with particular situations or observations. You always seem to throw up certain ideas, or puzzles in your songs. Why is that? What impulses or ideas drive your lyrics?

O: I’m a bit of a closet philosopher.  I studied it in university…whatever.  I like my songs to have a certain amount of open-endedness to them.  I hate preachy songs.  Life is much more fun when you come up with good questions than good answers, I suppose. It’s nice when someone comes up to me and says “I like that song you have about…” and I don’t even know what song it is because THEY are the ones who decide what the song is about. Makes for better conversation.

IN: Heard you were a bit of a metal head back your youth…

IN: Remember a drunken chat we had about Germany/Austria creating the greatest pop music ever (Bach, Mozart, etc.). That always tickled me & stuck with me. Care to expand this point for a wider audience?

O: Well.  That is a theme that I have explored over countless beers in countless bars around the world.  The crux of the idea thus far is, I think, this.  For the most part we in the music world (and probably the whole world) are very short sighted.  Basically all music was created before the advent of the electronic recording.  It’s all been variations since then.  That is not to say that there is no value to new music.  Quite the opposite. The world needs more music, always. It’s the competitiveness of the whole thing that crawls up my cranny. The reason for making music shouldn’t be to do something new.  That’s absurd.  Don’t say that fucking band A are better than band B.  because it has absolutely nothing to do with that.  And DEFINITELY don’t tell me that music from country A is better than music from country B. That’s retarded.

As we said in the introduction, Oldseed is often on tour, and worth catching http://www.reverbnation.com/oldseed
http://www.youtube.com/watch?v=kwlJf4Okg0s Oldseed – Saving Throw vs. Poison