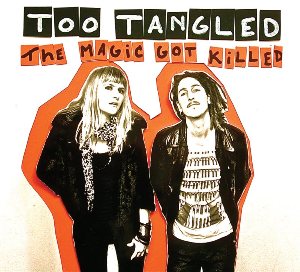 Too Tangled are from Belgium, and to someone who’s been living in Benelux for a while it’s immediately apparent. Whatever Belgium can’t do elsewhere, it can do in the world of pop. This is a glossy record looking to appeal to one and all, whatever the artwork suggests.  The duo (pretty girl, edgy lad, pulling that “just been pulled by the cops” look on the cover), knock out some highly effective pop songs albeit songs with a sleazy and scuzzy veneer.

And to be fair it can be a good listen, as the music growls along in a very effective way.  And this is despite the “identikit” titles – F.R.A.N.T.I.C., and Heaven Is Hell are two such examples which did have me wondering … Some of the lyrics are best described as generalisations in excelsis. But, like a card sharp who knows he can capture his audience with some simple deceptions, it’s just too sussed a record to allow you a moment’s chance to walk away.

The record starts pleasingly enough but nothing too special. After the clunky Face the Mirror, we get a set of fine songs that have a little more than gestures and attitude to them. The brooding “slowie”, Meet Me on the Corner is a fine track as is its languorous follow up, Heaven Is Hell. Big Bang is another reflective gem, and at this stage of the record, you begin to wonder whether the pair of them are acting out some Lee & Nancy fantasy. Elsewhere we get a return to a higher tempo albeit in a looser, less clunky form (Set Me Free and Give It Back). Finally we get No More Hurt and The Magic Got Killed; two really good quiet tracks, an ending which leads you to wonder whether there are two bands fighting over one presence here, the slow, interesting one or the brash shiny two dimensional one.