This ain’t big and this ain’t clever but I really don’t give a toss.

This ain’t big and this ain’t clever but I really don’t give a toss. 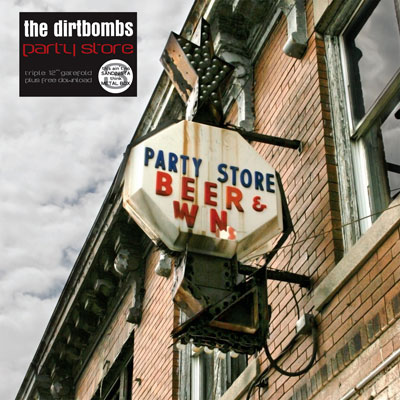 Ok, how about a bored Detroit Garage Rock band covering a bunch of dance/techno tunes. Think it’ll work? Of course it will.

This ain’t big and this ain’t clever but I really don’t give a toss. Party Store’s sleazy, scuzzy, simple and effective garage blues take on a bunch of floor fillers may not truly break any kind of musical ground but frankly, I couldn’t care less about that when I’m ‘durr ner nurring’ along in time with it. The drums on Sharevari, for example, could well be plucked from a Learn To Play The Drums part 1 handbook, they really are that simple, but that still doesn’t stop me from bobbing my head in time with it, thanks to the wonderfully sharp and monotonous guitar line that runs alongside it like an alarm call. Then there’s the bassline, which threatens to blow your speakers at any moment and a collection of wonderfully psychedelic and utterly ridiculous vocals too. Sharevari is apparently an old Detroit Techno track by A Number Of Names but I’ll confess to not being familiar with it. The version here, however illustrates the sparse yet effective appeal of the album perfectly but then they go and cover Soul II Soul’s Back To Life and all hell breaks loose.

The Dirtbombs treat the song with respect, as they do with all the tracks here, but they strangle Back To Life’s happy, jaunty dance origins with a sharp and scratchy guitar noise that will basically send fans of the original into a headspin. You’re either going to love this or hate it but you’ll have to have a strong stomach to love it truly. The twenty one minute version of Bug In The Bass Bin (can’t say I’ve heard the original of that either) will test everybody’s limits at least once in its running time but you have to applaud the band for even having the balls to take this on. They certainly mean business with this but whether or not you’re prepared to buy any of it is another thing entirely.

At the end of the day, the transformation of techno beats and rhythms into scratchy guitar parts and monotonous drums is an easy and effective one but this album has as much chance of upsetting you as entertaining you and for that alone it comes heartily recommended. It may well be an experiment, and one that falls flat on its face as often as it hits the ground running, but at least it’s not safe. The Dirtbombs may play around with a tried and trusted template, but at least they’re playing around.

Party Store will certainly not be everyone’s cup of tea, but it is mine. Or at least, most of it is and that’s more than enough. Check it out if you’re brave enough.