Hellabuster…….puts me in mind of what havoc an acid-soaked Beverley sisters could have managed in the British music scene back in the late 50s.

Hellabuster…….puts me in mind of what havoc an acid-soaked Beverley sisters could have managed in the British music scene back in the late 50s. 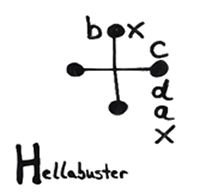 A wild and sometimes outrageously silly record, but one that still sounds a hell of a lot more interesting than other pop music currently being peddled to the likes of you and I. The opener and title track doesn’t stand on ceremony: it seems to be able to mix a plodding reflection about relationships and a take on what Mozart getting pissed at a back stage party must have sounded like. And that’s not all. Pop sass is present in bucket loads with the tinny stomp of Seven Silvers or I Won’t Come Back, both of which sound like a madman’s take on Giorgio Moroder’s muse.

I get the feeling that this sort of music only sounds appealing when you’re partially drunk in a field or in a car. Its restlessness is such that you need space and time to fathom what’s going on. For one, where else have you heard a paean to chocolate pudding? And there’s something in the quality of the vocals – which have a loose disconnected quality to them – that makes you want to keep elements of the music at arm’s length in any case. In that respect, tracks like Radical Plains employ very similar vocals to the psychedelic ones Clinton used on Free Your Mind… or the Undisco Kid. In other words, it’s brilliant and totally right but you can’t pay too much attention, for fear of taking off in a mother ship not of your choosing. And I think you’d go berserk listening to some of the more upbeat tracks in a lift or any other enclosed space. Fair enough, we can appreciate this music has context.

Before you think the record soundtracks some Mittel European teen Bedlam, give a listen to the marvellous middle section. Pour Moi is up there with Shatner or Gainsbourg in the camp stakes, and Charade – apart from being a classic pop song -puts me in mind of what havoc an acid-soaked Beverley sisters could have managed in the British music scene back in the late 50s. The ode to poet Sandy Moffat is a daft but superior take on all the twee pop that currently clogs up the senses, and Nothing More Anything is a Mac the Knife-style torch song, albeit one sung drunkenly and pissed-stained outside your window. All top fun. A few quiet tracks follow albeit not particularly restful ones: as the feeling of High European ennui threatens to engulf them: it’s all very smoking fags, reading Camus; it’s all very Scott 1…

But perhaps the best thing about this record is that it takes as long as the penultimate track – No Trains -for you to register that this song must be the first one that actively seems to try to make you want to like it. That’s guts, or brilliance, or both.