You are going to require a lot of energy for this record.

You are going to require a lot of energy for this record. 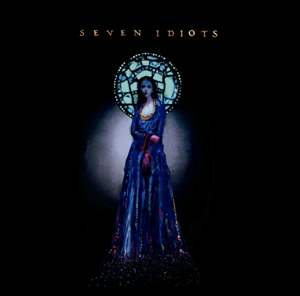 You are going to require a lot of energy for this record. As a listener you could well “peak too early” (to use a vulgar phrase) if you give everything to the first few numbers; and yet, and yet… it’s so difficult not to, as Seven Idiots starts in such a glorious, even, Baroque manner. It’s incredibly affirmative stuff.  If I may be allowed to indulge in metaphor for a moment; listening to the first three tracks, (especially the magnificent – and aptly named pair: Les Enfants du Paradis and Teen Age Ziggy), is akin to meeting one of those luminous, overpowering personalities at a party. The stage is transformed, possibilities are endless, you are enraptured, your life, until now settled, has been irrevocably shaken up.

Only…, (and this is when you’re at the stage where you’re listening to Bohemian Purgatory Parts 1 to 3, all 22 minutes of it), half way through your chat, you realise there’s something not quite right about this person. They never give up; their patter and attack is incessant, and they never crack. Maybe they are cracked… you begin to fear for your own sanity and shelve those quickly hatched, giddy plans. So it is with this record. By the time the listener gets to the dissonant collage of moaning, found sounds and ugly, smeared riffs that constitute The Offering Inferno you could be in the basket. That’s not to say you should skip giving The Offering Inferno a listen because it is marvellous, it’s masterful the way Trout Mask or Sister Ray is masterful, but it’s all kinds of everything at full pelt, full beam on.

Don’t be fooled by my flippancy. This is an astonishingly good record. It’s wonderful, it plays with past and future in some arcane, indefinable ritualistic way only ever achieved by the greatest rock records, but do you sit down and listen to Tago Mago or Tarot, or Mekanik Destructiv Kommando, or all of Fela Kuti’s or Matmos’s LPs in one session? If you do, then you are indeed armour-plated, or maybe on substances.