it’s predictable dad radio rock of the highest order, and I like it.

it’s predictable dad radio rock of the highest order, and I like it. 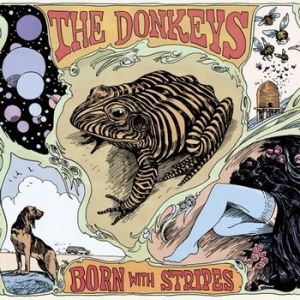 The cover is tremendous and probably the first incentive to play the record. But it’s taken me a good three months to write about it, probably because while I really like the record (I play it a lot) there’s not really a lot you can say about it. You end up talking about something else, namely why you want to listen to such an unpretentious, no frills, no surprises indie pop release.  The songs are acceptable enough, very much tipping a titfer to late sixties/early seventies rock radio, a track like Ceiling Tan being a benign mix of Tom Petty and Modest Mouse. I found myself thinking oh well, it’s okay but then found myself unable to take the CD out of the player.

In essence Born with Stripes has got something very charming and very human. It’s a modest record, (modest in the best sense of the word), and tracks like Don’t Know Who We Are, are just so self-depreciating you can’t help but smile. And New Blue Stockings is a gummy love song that most bands would be embarrassed about writing, it’s too, well, “to the point?” The cover also belies their hippy side: at times with stuff like Bloodhound, West Coast Raga and Kaleidescope the vibe all gets a bit Country Joe and the Fish, whilst the title track is a great rip off of Levitation in a lo-fi Soul Mod style.

To sum up, it’s predictable dad radio rock of the highest order, and I like it.