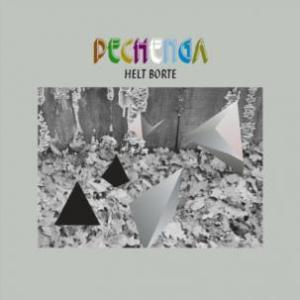 A beautiful, floaty record and one I initially couldn’t be arsed listening to because it had bloody triangles all over the cover. I’m beginning to wonder about all these triangles. Am I missing something important? Probably not…

Anyway this is a set of sonic dreamscapes that owes something to those beautiful records Eno Harold Budd and Daniel Lanois knocked out in the seventies and eighties. There’s a certain amount of stuff that could come from the Kraut stable, think Froese and Schnizlter and Plank. The guitar in Gitaro could also be something from Michael Rother’s Katzenmusik, and Pechenga itself sounds like a drowsy take on Jean Michel Jarre.

The music is incredibly evocative of frozen wastes and landscapes where nearly nobody lives in: if Ununoktium isn’t about some fishing hamlet with no off license, it should be. The sense of loneliness on something like My Frozen Spirit (the LP’s highlights) isn’t forbidding, as I said earlier it’s a beautiful record and the melancholy engendered is the sort that is comforting and replenishing. It’s a record with enough time on its hands to successfully create the smallest detail: Snowflakes actually does remind the listener of the feeling got when watching snowflakes tumble from the sky and Ultima Thule balances throbbing, grumbling synths with a delicate melody line that does feel as if the track belongs somewhere in outer space.  In that manner it is an intensely evocative record. Now and again you get a subterranean beat propelling the music, as on the pleasant title track, but the record’s strength is its lightness of touch and essential sparseness.

Relaxing, charming and well worth your time.