To reiterate then: it’s most refreshing that this record is messy, gangly and not perfectly formed.

To reiterate then: it’s most refreshing that this record is messy, gangly and not perfectly formed. 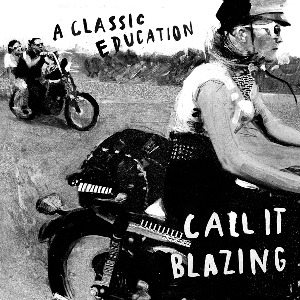 A really good LP this, though it’s not anything new… as a lot of bands have this wistful vibe about them nowadays. North American bands seem to be so obsessed  – however coyly – with a sixties wall of sound, or sixties production values, but A Classic Education do this very well, mainly because there is a feeling (however much made up by this reviewer) that they like – and actually listen to – the Seeds. They sound loose. (I really hope they listen to the Seeds. In any case they should).

To reiterate then: it’s most refreshing that this record is messy, gangly and not perfectly formed. It’s not looking to be revelatory either, which is a blessed relief: I’m bored of all these teenage symphonies to God. I want more things like the last track, Night Owl, something with all its weirdness and menace intact.

Call It Blazing has got just enough hippy punk spirit; it doesn’t feel twee even when you think the band is trying to be “sensitive”. Baby, It’s Fine or Spin Me Round are good cases in point; despite all the Spector-isms, or nods to CSNY, they’ve got enough character and attitude to avoid being mere brass rubbings. They also make music that’s a bit gawky. Billy’s Gang Dream starts off as a timid track, something that leans towards James Kirk or Johnny Richman would have written but it slowly gains courage to have a little jog through pastures psychedelic before its allotted time is up. Forever Boy and Terrible Day follow a similar formula, gentle introductions then building into something more muscular as the music gains momentum. I’d like to hear a bit more of the thump that Lost Time has, as they could rock out a bit more abrasively. But the band sit happy in their own skin, this is a natural record, not too forced or a tribute record masquerading as original work.

And that’s getting rarer and rarer these days.