In fact Dress, (and maybe these unprepossessing Bollenstreekers don’t know this), with their widescreen soundscapes and tales of agro-industrial pyscho/socio dramas sound very trendy indeed:

In fact Dress, (and maybe these unprepossessing Bollenstreekers don’t know this), with their widescreen soundscapes and tales of agro-industrial pyscho/socio dramas sound very trendy indeed: 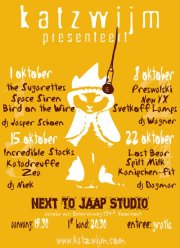 What is it about getting to Voorhout? Last week the enemy was storms, this week it was replacement buses taking us to Pop’s coalface. Still the bus was comfort squared when the bike ride of the previous week was considered, and the laconic driver did allow Incendiary to have a sneaky can or two on his bus, good for him we say. Once safely sat in the kitchen at Next to Jaap’s and chatting amiably with Gwen Douglas from Space Siren, we felt ready to take on what looked on paper a pretty great line up: stalwarts Dress, art-niks Katadreuffe and Arnold De Boer, frontman of The Ex,  – here in the guise of Zea – playing his excellent solo material.

Dress were first, a band who looked long in the tooth (the white tie won by the singer seemed from another aeon) and guilty maybe of the odd dodgy move and attitude, but capable at times of presenting something extraordinarily moving. The lyrics were at times startling in their ability to hit the spot: a line about living in the middle of nowhere and getting a taxi to go to another nowhere (I wish I could remember it word for word) was strikingly apt. The music – long, carefully drawn out odes to small town living sounded very much like the stuff currently being made by feted artists such as The War on Drugs. In fact Dress, (and maybe these unprepossessing Bollenstreekers don’t know this), with their widescreen soundscapes and tales of agro-industrial pyscho/socio dramas sound very trendy indeed: The Boss is back in more ways than one. Maybe they should be looking to play OCCI or de Nieuwe Anita?

Following that a complete change: Katadreuffe. I had been told by them that their new songs sounded way different. They were wondering what people would think. Well, to be honest they were different, but not as radical as I’d been warned to expect. The old dense sound is still present; the singing is still gnomic in the extreme. The wall of sound still batters the audience – so much so that some people still just cannot take a whole set from this band.  What is new – and really great -is the intensity and scope of the music, it seems to be aiming at creating a sinuous web of sound, it’s more muscular, and more tessellate, no longer content just to squat behind the rich wall of guitar noise. The song structures seem to be pushed and stretched to their limits. It’s almost as if the band has emerged from some sort of dark tunnel and is now busy stretching the odd sonic limb. I loved it. They’re on a quest to somewhere that is for shit-damn sure.

Finally we had Zea’s good natured set: Arnold’s music is interesting in that he always seems to be listening to his music – and being surprised by it – along with us; he has a curious set of songs, all of them inquisitive, all extremely rhythmical – his guitar playing is choppy and groovy, African-based, very much in the tradition of The Ex – and all very much based on a gentle emphasis or reemphasis of a simple idea.  This basic and tough structure that his Muse dictates makes it incredibly difficult for the listener to disengage, just because it’s so easy to be sucked into his concerns and agenda. Top stuff indeed.

After this it was a lope back to the bus and another chance for some clandestine drinking courtesy of the NS. Tops.