The Ex are a relentless proposition, and go through a determined set of disciplines and drills that give the feeling of a relentless machine, a buzz saw or a grinder.

The Ex are a relentless proposition, and go through a determined set of disciplines and drills that give the feeling of a relentless machine, a buzz saw or a grinder. 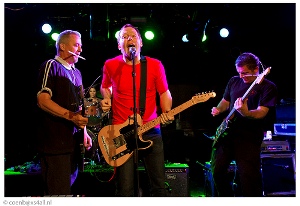 A truly marvellous night which, quite frankly, should have boasted a much larger audience. What is it about the LVC and promotion? Are they always happy that 50 or so people turn up? Can’t they make more of an effort, or do they care?  Who knows, outside of the robust SUB071 these are strange days indeed for Leiden’s musical podia.

No matter those who did turn up were in for a treat as well as a very diverse line up, incorporating free rock, glitchcore, folk and punk. First to play was City Hands who turned out to be a slightly academic type with a table full of gadgets. Now these sort of acts can either be revelatory or pretty flat, and this one, consisting as it did of a stew of primeval electronic sounds straight from the UFO-era Guru Guru or Popol Vuh veered between the two: just as something interesting started to happen things would tail off, or a passage would be played for slightly too long a period. Still the venue may have been against him. Playing in front of the stage never helps and his organic, undulating sound was pitched pretty low in the register, rumbling past people like a lorry in fog. Oh well… 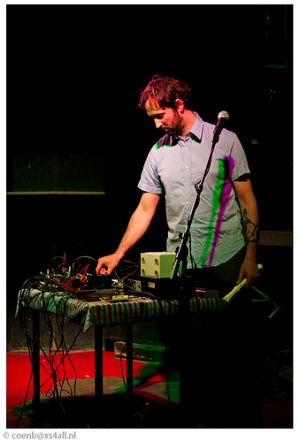 After this came Incendiary friend Bob Corn, who is guaranteed to put on a good show. Incendiary had doubts that he’d be able to pull off his intimate whimsical acoustic set, replete with his foot shuffling and silly stories in the LVC; but he triumphed. This was possibly the best show we’ve seen him do – quite how he managed to keep the audience quiet in such a cavernous setting was a mystery to us. 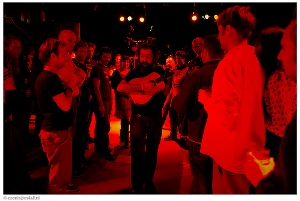 Maybe it’s his implacable calm, or his daftly endearing songs which sometimes feel completely out of time and space. Whatever, he had the crowd round him transfixed. The usual finale when he walks through the audience was a complete triumph on this occasion; we were moved by this simple genial act to demand an encore, which was given. And this enlivened Corn so much that he started chattering on, unwilling to let his moment of victory go. A marvellous moment and words can’t capture how good his gig was. A short break, then time for Julie Mittens, who were celebrating the release of their new and fabulous free rock LP. Coming onto some Honduran 60’s psyche (their choice, ‘cos they’re that hip), the Mittens played the new LP in its entirety, and in doing so, were able to show off the two sides to their musical nature.  Balancing the soft primeval growls and subterranean rumbles with the sheering white stabs of electricity has always been their strongest suit. Sometimes their sound was as enveloping and relentless as molten lava, their quieter passages, always brimming with intent built up a mood that simply had to have a release somewhere down the line – maybe it’s the drumming, an element which always seems to float along the surface of their sound like a gadfly on the surface of a pond. At some point the experienced Mittens watcher knows that the band will break loose, almost combusting with a release of white noise. And of course they did, Aart Jan Schakenbos leading the charge with his overheated passages of white noise. A marvellous gig from true underground heroes. 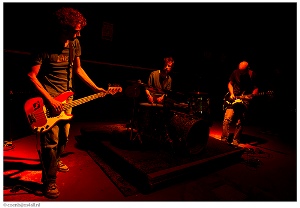 Rounding things up in glorious fashion were The Ex, who – on this showing – are still brilliant after all these years. In fact that’s a daft quibble, they’ve always been brilliant. The Ex are a relentless proposition, and go through a determined set of disciplines and drills that give the feeling of a relentless machine, a buzz saw or a grinder.  The staccato blasts and complex meshes of guitar sound also suit the quizzical approach of singer Arnold de Boer, who is also an endearing and affable presence in the band and balances out the Savonarola-esque  stage presences of Andy Moor and Terrie Hessels. Most tracks were drawn from their latest magnificent LP, Catch My Shoe with noticeably strong takes on Cold Weather is Back, Eoleyo and Bicycle Illusion, with Problems being a seething encore. It was such a shame that only a small crowd had turned out because this is a band to treasure. Oh well, better luck next time, eh, LVC?